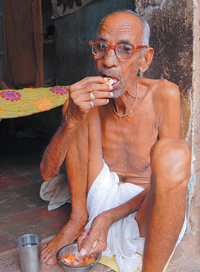 There is a belief that it is the duty of the government to look after the poor. The British limited their commitment to maintaining peace, for disorder affects the poor most. When famines broke out, they set up relief works. The Congress, which replaced the British, has expanded its commitment to the poor. First it extended its duties to education and health. Then it took it upon itself to give the poor foodgrains and jobs.

If benefits are restricted to the poor, they must be identified. Congress governments have applied the principle of self-selection: getting benefits from the government should be such a hassle that only those who are desperate would go to it. Government schools lack chairs, tables, sometimes even a roof. Government hospitals are overcrowded, and the treatment they give is minimal. So private teachers, schools, doctors and hospitals have found a ready market amongst those who cannot bear the conditions in government schools and hospitals, and who are prepared to pay.

The government has applied the same principle of self-selection to foodgrains and jobs. It has created hurdles to getting a ration card. It forces farmers to sell it foodgrains, and has created a mammoth company to store and distribute them. It has given licences to thousands of traders to distribute rations. They give out rations sometimes; sometimes they do not. They distribute low-quality foodgrains. They make people wait. Getting grains from them is so unpleasant that only the poor would bother.

Similarly, it has created the National Rural Employment Guarantee Scheme to give jobs to every villager who would ask for it, but the work it offers is manual, generally outdoors. As the government calculates, only those with no other recourse would volunteer to do the work.

But this strategy of making its favours as unattractive as possible creates a problem: it gives its employees opportunities to profit by making the favours even less attractive. While they get their pay from schools, teachers teach as little as possible there so that children would come to them for private tuitions. Government doctors worsen their service so that patients would come to them privately. Traders substitute second-rate grains for what they are given to sell and sell good grains in the open market. Gram Pradhans create fake worker rolls and pocket the wages so saved. The poor have become an instrument for rampant profiteering.

Once in a while, the government gets worried about this. So since 1992, it has been conducting censuses of the poor. For every village, some local bureaucrat is required to make a list of all below the poverty line. Since being poor brings benefits, and inventing poor people gives government servants a chance to profiteer, the censuses have created an incentive to list bogus poor and count those who are not poor as poor. According to the 2004-05 NSS, 16.8 per cent of the richest quintile and 30.5 per cent of the next richest had cards certifying that they were below the poverty line.

To control this racket, the Planning Commission made an estimate of the total number of poor people from the quinquennial National Sample Surveys of consumption, and used it to ration the number of the poor that a state, district or taluka may have. In other words, it tried to fix the maximum size of the poverty industry.

The ministry of rural development did not like this encroachment on its business. So it appointed an "Expert Group" to give a more convenient definition of poverty. The group says half the country's population should be considered poor. The ministry of rural development must ration out this half across the villages by means of a complicated procedure. Then officials in each village should select their poor within this ceiling by giving points to families. Some categories such as families headed by single women, minors or disabled people or homeless people should be counted as poor without any further question, some like income-tax payers and owners of cars or tractors should be automatically excluded, and the rest must be given points for having landless, scheduled-caste and other "disadvantaged" people in the family. The points should be used to rank families and choose the required number of poor families.

The Expert Group's method requires the use of the same village leaders who cooked the earlier data, and will give them no less opportunities to benefit themselves and deprive the poor. They by and large support the ruling establishment; they are part of it. So it is highly likely that the government will accept the Expert Group's recommendations.