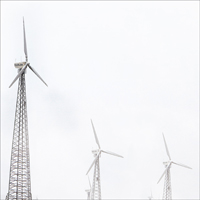 08 November, 2014
Print this article Font size -16+
Even before the renewable energy certificate (REC) scheme could make a splash, it seems to be fizzling. It was introduced to give renewable energy in India a push, “the REC market is heading for a dead end” already, rues Jayant Deo, MD and CEO of the Indian Energy Exchange (IEX), which holds 92.1 per cent of the REC market.
The latest trading session, on 26 September, saw record sale offers of 664,641 RECs in the non-solar segment, while purchase bids were only about a third of that. This worrying trend of supply exceeding demand began in June.
The REC mechanism allows players to set up renewable energy projects and trade the power generated as certificates where 1 REC is equal to 1 megwatt-hour. It also helps distribution licensees, captive power consumers and open-access users purchase a minimum of 5 per cent power from renewable sources to meet their Renewable Purchase Obligations (RPOs), triggered by guidelines from the National Action Plan on Climate Change.
Initially, the scheme got a positive response since it gave renewable energy generators an added revenue source and freedom from long-term power purchase agreements. Sale offers grew from 150, when it was first traded in March 2011, to 664,641 now. However, the market, which once saw demand exceeding supply, is now experiencing the reverse.

Deo says, these entities are getting away with non-compliance because of poor enforcement of regulations and the lack of any penalties. With state discoms being allowed to renege on obligations, many expect private players to follow suit. State units, of course, justify their non-compliance by claiming that they’re struggling under financial mess. The period of compliance is also an issue. For the scheme to succeed, it should be quarterly as opposed to being the last quarter of a fiscal. The fact that 58 per cent of the total trades happened during January–March 2012 proves the skewed activity. Those in the industry also suggest allowing financers of the projects to purchase RECs, or allow projects owners seek buyers outside the IEX.The main reason for this, as per IEX’s analysis, is because only a few states have shown real intent in meeting RPO targets. The worst truants are the state distribution companies (discoms), which make for a minuscule percentage of the REC demand. “70–80 per cent of the demand comes from the private discoms. The remaining come from captive and open-access consumers,” says Vibhav Nuwal, director at REConnect Energy, the largest trader in this market. Although, Nuwal says, the solar REC market, which began trading in May 2012, is too small and volatile to draw inferences from; he acknowledges the widening demand-supply gap in the non-solar segment.
All said and done, the scheme definitely has its merits. It spreads the cost of developing renewable power to everybody, and taxes conventional energy users. It also allows states with poor renewable sources to meet their RPO targets. Its success is reflected in the fact that REC projects constitute 12.6 per cent of India’s total renewable energy capacity of 24,998.46 MW.