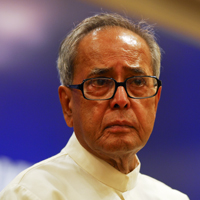 The lower economic growth of 6.9 per cent, as against the original estimate of 9 per cent, will further aggravate the fiscal deficit situation. The economy grew by 8.4 per cent during 2010-11.

Meanwhile, Indian industrial production (IIP) likely grew at a weaker annual rate of 3.4 per cent in December, down from November's 5.9 per cent, on slowing infrastructure output and domestic demand, according to a Reuters poll.

Forecasts from a poll of 26 economists on the volatile index taken this week ranged from a fall of 4.3 per cent to an increase of 5.1 per cent, although all but one forecast was for the index to rise.

The government had earlier said that its subsidy bill is likely to increase by over Rs 1 lakh crore, over and above the original estimate of Rs 1.34 lakh crore, mainly on account of higher outlay towards fertilizer, food and oil.

On the issue of food security, Mukherjee said, "We shall have to work out an implementable work programme for meeting the requirement of the people despite problems and constraints".

"Today (after 65 years of independence) people are not ready to wait any longer ... today they are eager to have their empowerment ... not in the documents of the Planning Commission or the assurance of policy makers, but entitlement backed by legal enactment. That is the rational of having the Food Security Bill," Mukherjee said.

Stressing on the importance of an efficient public distribution system, the Finance Minister said a section of the society could be insulated from the adverse impact of inflation by supplying them essential commodities through PDS.

There are about 18 crore ration card holders in the country who are entitled to subsidised commodities under PDS.

Mukherjee said huge investments are required in the agriculture sector, including on farm technology, to meet the food requirement of over 1.2 billion Indians.

Mukherjee also said despite all criticisms, the flagship employment guarantee scheme -- MNREGA -- has set a benchmark in rural wages.