Looking For The Positive 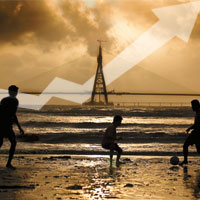 08 November, 2014
Print this article Font size -16+
Even as industrial slowdown continued in India and the fiscal deficit widened, ratings agency Moody's maintained its India's rating outlook at stable, giving the market some hope for the future. The Sensex jumped over 300 points on 27 November on optimism that the government will be able to muster enough support on the multi-brand retail issue and other reforms that were aimed at reviving growth and staving off a credit rating  downgrade.

A recent Deutsche Bank study said India’s debt fundamentals are poor but not alarming. Yet, the recent deterioration of fiscal deficit and public debt mark a departure from the trend seen in the boom years of last decade, when strong growth helped reduce government liabilities substantially. The potential worsening of the debt dynamics has added a greater degree of urgency to implementing growth supportive policies and  moving forward with fiscal consolidation.

Moody's said on 27 November that the outlook on its Baa3 rating for India is stable, in part due to the country's high savings and investment rates, as debate rages in Delhi over whether the country can avoid credit downgrades from other rating agencies. In its annual credit analysis on India, which Moody's said does not constitute a rating action, the agency also cited the country's large, diverse economy and strong gross domestic product growth as supportive of the rating.

However, the rating agency continued: "The rating is constrained by the credit challenges posed by India's poor social and physical infrastructure, high government deficit and debt ratios, recurrent inflationary pressures and an uncertain operating environment."

Last month, Standard & Poor's warned India still faced a one-in-three chance of a credit rating downgrade over the next 24 months, although it said a series of reform steps launched in September had slightly improved the country's prospects.

Fitch also has a negative outlook on India.

Industrial Slowdown Continues
The CII-Ascon Survey, which tracks the growth of industrial sector of the economy on quarterly basis through feedback received from sectoral industry associations, shows that out of 101 sectors, only 23 per cent predict ‘excellent’ to ‘high’ growth in Oct-Dec quarter this year, down from 34 per cent in the same quarter last year. Correspondingly, the percentage of sectors reporting ‘low’ to ‘negative’ growth performance increased from 48.6 per cent to 56.4 per cent and those reporting negative growth moved up from 17.1 per cent to 20.8 per cent during the same period.

The subdued growth outlook for the current quarter comes on the back of a bleak growth performance recorded by industrial sector during the previous quarter (July-Sep) on year-on-year basis. According to the survey, of the 109 sectors covered for that quarter, only 3.7 per cent sectors reported excellent growth compared to 23.8 per cent during the same quarter last year. On top of that, the percentage of sectors reporting ‘negative’ growth increased from 10.6 per cent to 32.1 per cent during the same period.

Bank shares were leading the gains ahead of the November derivatives expiry on Thursday. HDFC Bank Ltd  rose 2.6 per cent and ICICI Bank Ltd gained 1.3 per cent, while mortgage lender HDFC was up 2.6 per cent.

Export-driven technology shares such as Infosys rose, tracking the recent weakness in the rupee, which has dropped about 3.5 per cent in November.  The rupee could continue to remain under pressure in the near-term due to a widening fiscal gap, with hopes diminishing for dollar inflows as the parliament continues to remain in a deadlock over reforms, which  could bring in much-needed foreign investment.

Finance Minister P. Chidambaram has an ambitious target of holding the government's fiscal deficit for 2012-13 at 5.3 per cent of gross domestic product, even as sceptical private economists forecast a deficit closer to 6 per cent.