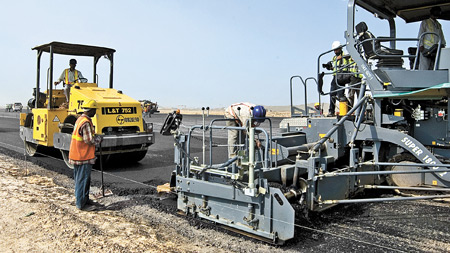 The State Bank
of India's (SBI) estimate — it is the largest lender to infrastructure, with a portfolio of over Rs 1,20,000 crore — of the private sector equity was $22 billion. Debt from both PSUs and the private sector was about $70 billion. About $180 billion came in from both central and state government budgetary resources. FDI brought in $40 billion or so. The financing has not been across the various segments either: telecom and power got the biggest chunk, while road and rail transport suffered. The government's target of building 20 km of road per day was pared down to 12 km a day. The Planning Commission's review of the first three years of the Eleventh Plan was similar. Funds from the central government budget financed 45 per cent of the total investment. The remaining came from debt (41 per cent) and equity (14 per cent).

On top of that, the total funding gap during the last two years of the Eleventh Plan was about Rs 1.28 lakh crore (Rs 1,885 crore in  equity and Rs 1.26 lakh crore in debt finance, usually available from commercial banks, NBFCs, insurance firms, ECBs and infrastructure debt funds).

Scouting For More
Under these circumstances, how will the government invest $1 trillion? Let's not forget the $125 billion shortfall from the Eleventh Plan. The government puts its faith in a few new initiatives, and on the private sector, which actually accounted for over 35 per cent of infrastructure investment in FY11 and FY12. In the FY13 Union Budget, finance minister Pranab Mukherjee made a couple of key announcements. The limit for issuance of tax-free bonds to finance infrastructure projects was raised to Rs 60,000 crore. For power projects, the conditions for accessing ECBs would be relaxed, as would the eligibility conditions for viability gap funding and PPP projects. Earlier in March, an infrastructure debt fund with an initial size of Rs 8,000 crore was launched. But all these steps, while helpful, will not be enough.

A big part of the financing problem is the very nature of infrastructure finance. "It requires long-term debt finance, which in countries like ours, is not easily available," says Dhruba Purkayastha, president and CEO of the financial advisory division at Feedback Infrastructure Services. "Commercial banks are not willing to lend to projects that have extended gestation periods, given the asset-liability mismatch." The biggest worry for investors is the project's bankability. Says Purkayastha: "First, the issue is of risk allocation between the government and private sector, and I think each project needs a good initial risk allocation assessment with given contractual structure even before bidding it out. Some attempts are being made by the Department of Economic Affairs and the Planning Commission. Second, is the issue of project risks being assessed and measured so that lenders can take appropriate decisions on price of money and capital allocation. What happens today is mis-priced loans (often syndicated). Credit ratings for infrastructure projects are faulty and do not serve the purpose of enabling project finance."

break-page-break
In recent months, however, a number of foreign funds and private equity (PE) firms have shown significant interest in financing infrastructure. Saudi Arabia is in discussions to set up a joint venture to bring in $750 billion; Blackstone, among the best-known PE firms, said that it had earmarked about $1.5 billion for the next two-three years.

However, not everyone is convinced. "Raising funds via ECBs is an easy, but high-risk option," says Amrit Pandurangi, senior director at Deloitte India. "And a long-term bank loan comes with the uncertainty of rising interest rates." Developments in recent months, a depreciating rupee and global turmoil, might make raising overseas debt more difficult.

Weak Structure
To be fair, the government has taken steps to encourage investment in infrastructure. In July 2009, the Cabinet Committee on Infrastructure was constituted. Then, there is the PPP Appraisal Committee, for streamlining procedures related to public-private partnerships and simplifying the approval process. Since its constitution in January 2006, the committee has sanctioned 255 proposals at a total estimated expenditure of Rs 2.42 lakh crore.

In his budget speech, the finance minister also referred to the government's intention to streamline the viability gap funding (VGF) programme, which appears to have worked reasonably well. Under the VGF programme, the government — state or central — will provide a grant of up to 20 per cent of capital costs incurred by a PPP project approved by a central government agency. An additional 20 per cent may be given as a grant by a state government.

Other forms of assistance have, however, not met with enthusiasm by the private sector. Take-out financing, advanced as a good way to provide infrastructure financing, has not quite worked. Take-out financing is a method of providing finance for projects (say, of 15 years) by banks that sanction medium-term loans (say, 5-7 years). The loan will be taken out of the books of the financing bank within the pre-fixed period, by another institution, say the IDFC, after the project reaches certain milestones.

"Low credit ratings act as a deterrent to insurance funds and pension funds, best suited to invest in long-term debt," adds Abhinav Sharma, assistant general manager at CARE Ratings. "The risks are highest in the initial phase of the project, and banks are reluctant to part with a project after they have successfully taken the initial risk."

The Sceptics
Could insurance companies and pension funds (at present they account for about 7 per cent of infrastructure finance) play a larger role? Not likely, say market observers, citing onerous regulatory restrictions. It is the same problem with long-term financing. For instance, the IIFCL can provide funds to infrastructure projects up to only 20 per cent of the total project cost as long-term debt. Even a relaxation in their take-out financing schemes has not helped that option push the envelope. What of infrastructure debt funds? In November 2011, the Reserve Bank of India (RBI), along with the Securities and Exchange Board of India (Sebi), announced guidelines for Infrastructure Debt Funds (IDFs), which can either be a mutual fund or an NBFC. Commercial banks can act as their sponsors. IDF-NBFCs can raise funds through issue of either rupee- or dollar-denominated bonds of minimum five-year maturity.

These debt funds are expected to direct funds from insurance companies and pension funds into infrastructure. But again, given the high risks and the long gestation and repayment periods, IDFs are allowed to invest only in PPP and post-commencement operations date projects that have completed at least one year of satisfactory commercial operations.

Retail investors are not enamoured by infrastructure investments either. Swetha P., a retail investor, recently came across advertisements for investment in IDFC's and L&T Finance's tax-free bonds. While looking for information on them, she came across a fixed deposit of a well-known transport firm that gave annual returns of over 10 per cent. It is not difficult to guess which one she chose.

Depending On Debt
Report after report of committee after committee has attested to the importance of a deep and active bond market as a source of long-term debt capital. But the government has not been able to create one. Many blame the banks. "They are the biggest impediment in developing a long-term bond market," says the head of a leading financial services company who requested anonymity. "They are unwilling to part with their relationships and compete with other instruments. They could buy the very same bonds, but marking them to market is hard on their balance sheets and risk management." True, they have been stepping in for the past few years to finance infrastructure projects. As Purkayastha points out, most commercial banks have been actively financing infrastructure even within the constraints of asset-liability mismatches, but are reaching their exposure limits. "The question of bankability remains," says Palve. "Commercial viability makes a project bankable. In its absence, blaming the lack of funds doesn't seem correct."

As an illustration, Pandurangi points to electricity boards whose input costs have risen, but revenues and tariffs have not kept pace. "If a project is reasonably good, if the group raising money is well known in terms of execution, equity financing is not an issue," he says. "But if it is a new group or if the group bid aggressively, it will be difficult." Anil Ahuja, managing director, 3i Asia, an investor in infrastructure projects, laments, "There are not enough projects that have critical building blocks in place."

Does this mean that the roots of the financing problem lie elsewhere? The biggest hole is at the construction phase, says Jai Mavani, leader, infrastructure & real estate, PriceWaterhouse-Coopers. "With issues like land and environmental clearances, you can expect delays in project execution right at the beginning." Globally, governments take care of the approvals, while investors only have to worry about efficiency in construction and the economics of operations. But in India the combination of regulatory uncertainty and the operating ecosystem make it difficult for the sector to raise funds.