Looking For A Needle In A Haystack 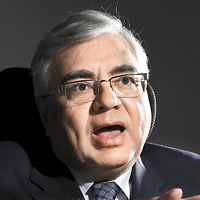 08 November, 2014
Print this article Font size -16+
The more things change, the more they stay the same. We have P. Chidambaram back as finance minister presenting his eighth Budget. His former advisor, Parthasarathy Shome, is back in the finance ministry — in fact, in his old room, albeit with Cabinet rank. Shome has returned to advise the FM on what to do with tax policy. The Direct Tax Code is yet to be introduced. The Goods and Services Tax is still a work in progress. The fiscal deficit is  a huge concern. Growth is always a worry. The Budget has introduced a surcharge on the rich to offer some giveaways to the relatively worse off. Yet the Budget is realistic and stays the course despite elections being around the corner. Read what Shome has to say on why they did what they did in an interview with BW | Businessworld. Edited excerpts:

What other options to the surcharge were considered; why was this thought the best?
We wondered whether we should adjust the tax slabs, but tinkering with them was ruled out. The finance minister clearly wanted this as a one-time measure to help stick to the fiscal targets. Hence a surcharge was thought most appropriate.

Excise and service tax rates were raised last year, there wasn’t room to do anything there. With manufacturing going through a dismal period, there was little scope with excise. And in service tax, it would be inconsistent to raise tax rates on those who are already paying while encouraging those who have not been paying to pay up without interest or penalty through voluntary compliance encouragement scheme.

While we have applied the 10 per cent surcharge on incomes above Rs 1 crore, there is also a giveaway through tax credits for incomes upto Rs 5 lakh. So, there is just a small amount of net revenue gain from individual income tax changes.

This is an equity-oriented measure to provide comfort against inflation to those in the lower tax bracket. Thus, at 10 per cent inflation, Rs 2 lakh becomes a nominal 2,20,000 while the real value remains the same. So a person at effectively the same — real — basic exemption level would now pay a 10 per cent income tax on that extra 20,000. That 2,000 will be given back to the taxpayer as tax credit.

At the upper end, if you look at our 30 per cent marginal tax rate, as one goes up the income levels, the tax rate is lower than in most emerging and developed countries other than Singapore. In India, actually our ability to pay tax at these high levels of income should be higher at purchasing power parity. So our marginal tax rates at these income levels should be higher, but they are lower. The temporary surcharge is, therefore, only a partial correction.

Why not try and get more people above Rs 1 crore into the net rather than taxing those who are already paying more? What do you think the actual number would be?
Searching for the number would be like looking for a needle in a haystack. It is well known that the undeclared-income economy is very large. It is believed that there are a lot of return filers who pay income tax but habitually under-report incomes.

If you look at the real estate sector alone, you can see that. In a way, we are trying to address that through the voluntary compliance encouragement scheme in service tax. For the five past years, you are being given an amnesty and when you do come forward, the department should ideally cross-check if you are paying commensurate income tax. So, we have to link the service tax to the income tax.

But individuals earning in crores will have a certain lifestyle. Purchases of cars, houses and other goods which require a PAN number and so on. Is there no way to identify who is under-reporting?
For those with a PAN, it is being done. It is from this cohort that under-reporting occurs. Thus, we are doing it through CASS (computer-assisted scrutiny selection) based on, first, the requirement that PAN be used for six types of transactions like you mention and, second, for the concerned third-party to send information on such transactions to the department. An algorithm fits income against the values of such transactions. Incompatibility between the two throws up taxpayers to be scrutinised by the department.

But whether CASS is sufficient at this point is the issue. You need to broaden the search modes. Rather than depending on only six parameters from third parties used in CASS, one can develop a “complex individual profile”. This is being increasingly used across countries. For instance, a person may have income from five residential properties, financial incomes —income from multiple sources — coming in. All the information should ideally be narrowed down to a capsule on that individual. If you have a modern computer hardware and the relevant software — there is a useful software called Icegate — then it can be done.

Such a system would need the income tax department but also excise, customs and services to be involved. So it is not just the houses or cars or mutual funds they buy, but what kind of business they are doing that needs to be tracked.

The larger chunk of revenue is, of course, coming from the corporate surcharges….
Yes, the revenue generator had to be corporate. The surcharge on corporates will fetch bulk of the ARM. But the impetus was necessary for certain sectors. That’s why a substantial investment allowance was provided for manufacturing and similarly for construction. The idea was to provide support to targeted sectors while taking revenue comfort from the corporate sector as a whole.

Is the watered down version of the Direct Tax Code worth introducing at all ?
We have to work with what we have now. The standing committee has given its comments clause by clause on the new draft Bill, and we must now work with this. We need to see if instead of looking at it as just a finance act, can some structural things be built in.

But the 2010 draft waters down the original substantially….
There are several differences between the two. We can nevertheless improve certain aspects. A critical difference is the treatment of savings. The original draft had tried to make it very savings oriented. The income from these savings and retirement schemes would be taxable only when you withdraw your money from it and consume. Tax was being paid only at the point of consumption. In a way, it is like deferring your tax, so you are being encouraged to save for as long as you can. The new draft treats different saving-types discriminately when you could have done with neutrality and taxed all the schemes at the time of withdrawal from them. Now, some things are exempted and some are not; so it is not neutral.

Are GAAR provisions absolutely necessary? What is the gain at a macroeconomic level?
GAAR is an anti-avoidance issue. It should not be looked at as a revenue raising measure. This is an error that even revenue departments in other countries have made.

You want a fair distribution of the revenue burden across companies. Even if you are eventually collecting the same revenue, if some are avoiding and some are not, the distribution gets skewed and you have to ensure it doesn’t happen. What happens is that the avoiders get away and those who are paying bear not only the tax but also additional duties such as any surcharge or cess that have to be levied for revenue purposes. So, the main objective of GAAR is anti avoidance for all these structures that are completely artificial. At the same time, we have to ensure that it is not a roving enquiry against taxpayers.

What does that mean ?
A roving enquiry is when the tax administration — in an extreme case — asks a taxpayer why GAAR should not be invoked against you. On the other hand, the tax administration has every right, obligation and duty, in my view, to say that we have this evidence against you and now kindly respond why we should not take action. If there is clarity and non-roving enquiries, the country will get more foreign investment.

Let me explain in some detail. Several developed countries have used islands as tax havens and some artificial structures have been accepted. In such arrangements, neither does the source country (where income is generated) tax it nor is the origin country (from where the investment flow occurs) keen to tax as they are interested in the investment and the returns from the investment, perhaps more than the tax. So instead of these companies routing directly from the origin, they route it through the tax havens where tax laws are likely to be soft. Many developed economies were quite comfortable with it.

Therefore, more and more such arrangements became acceptable. And emerging economies went along as they need the foreign investment — indeed they are competing for it. After the global crisis, advanced economies are becoming more wary of such routing and resultant revenue loss. Now countries have started looking at ways of bringing such arrangements into the tax net. The idea is that rules such as GAAR allow you to pick out such arrangements and say that we will not allow these and we will tax these in the source country.

Then why have we delayed it now to 2016?
There are many different ways that these structures have emerged and, in many cases, the investments have already been made based on these arrangements. We need to give them sometime to restructure along acceptable lines.