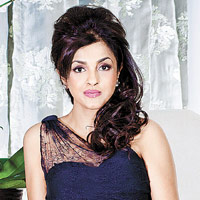 08 November, 2014
Print this article Font size -16+
What you shop for and how you go about it is everything. I was privileged enough to be at a jewellery launch by Dior, where the pieces were designed in-house by its Paris-based designer, who makes only 14 of them a year. Each piece costs millions and has a story. In New York, women come by chopper to the helipad atop the building, zip downstairs to the jeweller, pick up their piece and fly away, almost unseen. That’s luxury.

And there is no harm in taking expert advice. There are many who have the money but not the knowledge or the taste to buy the right things. For instance, if one has to pick up Giorgio Armani makeup, it is better to take a stylist’s help in picking up the right cosmetics.

Style Statement
Shopping is not only about whims and fancies but also about logic. A small example is of insulated glasses, which are better bought in colder countries. Similarly, one should make an effort to buy a good bed. After all, we spend one-third of our lives sleeping. In India, where people come to the doorstep with taar to repair mattresses, one can also buy a Hastens luxury bed with real horse hair for Rs 50 lakh.

We have a lot more available in India now than in the past, but the gap is still huge. From crystalware-makers Waterford to Saint Gobain, everyone is here not only because of the demand, but also because people have realised that it is not just about Muranos and Riedel anymore. People now know about the cut and the feel of glassware. However, on a practical note, it is better to buy crystalware in India than abroad as there is always the danger of it breaking or getting damaged in transit.

Internet certainly aids shopping. But if what I want to buy is something that is going to be a passion for me, I would love to go touch, feel and admire it, and then probably buy it. If it is a carpet, I want to feel it under my feet, unless I am very sure of the brand. If I had to buy, say, a Hastens bed, I could buy it on the Net, because I know what quality I will get.

Details are important. People who lead the high life need a balanced sensibility in whatever they are buying. If they are buying a refrigerator abroad, they have to analyse what is their main storage. If we pick up an imported brand, we have to realise that in the West a lot of the food is deep frozen (and thus a bigger deep freezer), while we prefer to store fresh produce in our refrigerators.

What one buys is also a reflection of one’s lifestyle. A film star may prefer opulence. A professional, like a doctor or a lawyer, however successful, may have an unpretentious choice. That’s still different from an industrialist, who might prefer a blend of both opulence and understated class. For instance, if an industrialist uses a tissue box made of rosewood, a lawyer would buy the same in white cedar. If the industrialist would pick up crystal from Turkey, the professional would go for a Waterford or a Riedel.

The other thing is to mix and match — an ordinary kettle with Wedgwood tea cups. Moreover, it is rare to find an entire set, as trained staff to look after fine cutlery is difficult to come by. Alternatively, people who use the finest chinaware clean it themselves.

Then there are things that are bought almost exclusively as talking points. Wine, for instance, is bought more for its arrogance value than for its taste or enjoyment. There’s a fantastic red wine called Morgon available in our five-star restaurants. It’s better than most of the well-known brands of wine. But since many have not heard of it, it is overlooked — there is no conversation or arrogance attached to it. It’s also priced nominally.

However, wine conversation is always about the brand and not the flavour. Armand de Brignac, for instance, became bigger than Cristal. The brand has attitude, it comes in a rosewood box; a bottle of Brignac cost Rs 75,000 when it was launched in India. People buy the conversation and not the champagne. A true connoisseur, however, does not need conversation. You know what you want.

On the other hand, some brands have dropped prices. In my opinion, they are coming to their senses. Judith Leiber never sold bags below Rs 2 lakh. It is now introducing an overture line for $300-400 (under Rs 20,000). And it is not because of the economic slowdown. I may be used to carrying a Judith Leiber, but one can’t carry a new bag everyday. So when a brand brings down prices, people buy more of its products. I can have fun bags, match them to any outfit, and give them away when I am bored of them.

But there is another aspect to being cost-conscious. When it comes to cars, some people buy the best upholstery but compromise with a cheap accessory like a low-quality phone charger or cigarette lighter.

Sometimes it is very difficult to make out a fake from the original. Now, even a good chef may not know if the Rs 60,000-a-kg truffle in his hand is genuine. Last month, my husband and I were in Munich shopping for a new apartment. There was a beautiful European art installation that I was going crazy about as a large corner piece. When I was told the price — 10,000 euros — I said, “What a steal!” So we asked where it was from? The attendant said, “China.” That was the last time we looked at that piece.

The author is director of Pagoda Advisors

(As told to Prasad Sangameshwaran)