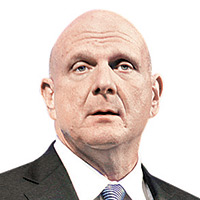 08 November, 2014
Print this article Font size -16+
Steve Ballmer’s era at Microsoft ended after the former CEO resigned from its board, ending more than three decades of direct involvement in the company. In his resignation letter, he mentioned a combination of responsibilities, including his $2-billion acquisition of the Los Angeles Clippers basketball team, that made him too busy to be on the board. Ballmer, however, remains Microsoft’s top individual shareholder, with more than 333 million shares worth over $15 billion.

Show’s Over
The hands that helmed the censor board are now in handcuffs. Central Board of Film Certification (CBFC) CEO Rakesh Kumar has been arrested for allegedly demanding a bribe of Rs 70,000 to clear a regional movie. An authorised censor agent and an advisory panel member of CBFC were also arrested for demanding the bribe on Kumar’s behalf. Apparently, Kumar had a rate card for issuing censor certificates. He charged Rs 1.5 lakh to pass a film in jiffy and dealt with producers only through his agents.

Brief Respite
After 100 days in custody, MCX promoter Jignesh Shah has been granted bail for a cash surety of Rs 5 lakh, but has been ordered to appear before the Mumbai Police twice a week. The CBI, however, wants to give no breather to Shah, who was arrested in connection with the Rs 5,574.35-crore fraud at the National Spot Exchange. Soon after his release, CBI registered a case against him and the former ED of Securities and Exchange Board of India J.N. Gupta for allegedly violating laws to grant MCX  an extension as a private stock exchange.

PC Guru
John Akers, the chief executive and chairman of IBM during a turbulent time when the rise of the personal computer undercut the profitability of the mainframe computer business, died 22 August in Boston aged 79.  Akers, a former US Navy pilot, joined IBM in 1960 and stayed there for 33 years, until being ousted as CEO in favour of R.J.R. Nabisco Holdings’ chief Louis Gerstner — IBM’s first top executive from outside the company — as financial losses mounted and the stock price skidded.

Dishing Out Dirt
Former comptroller and auditor general Vinod Rai, who had estimated a notional loss of Rs 1.76 lakh crore in the

2G spectrum allocation and Rs 1.86 lakh crore in coal block allocations, has revealed that the UPA government pressured him to delete names from the CAG reports on Coalgate and Commonwealth Games scams. His book Not Just An Accountant, releasing 15 September, will have details of how considerations of survival led then PM Manmohan Singh to acquiesce to decisions that caused a loss to the exchequer.

Giving For A Cause
The former CEO of software services major Infosys, S.D. Shibulal, has announced that he will donate around Rs 36 crore to two charitable institutions that he has been working with for the past

15 years. He, along with his wife Kumari, has pledged 60 per cent of the monies to the Sarojini Damodaran Foundation, while the  rest will go to the Advaith Foundation.

Likely Choice
US-based economist Arvind Subramanian is poised to be named the chief economic advisor to PM Narendra Modi. His appointment will encourage those pushing for pro-market changes. Subramanian is a fellow at the Peterson Institute for International Economics in Washington. He has also served at the International Monetary Fund and at the General Agreement on Tariffs and Trade.

Rich baba
Jack Ma, founder and chairman of Alibaba Group, is China’s richest man. According to the Bloomberg Billionaires Index, the 49-year-old has a net worth of $21.8 billion. He is $5.5 billion richer than Ma Huateng, founder of Tencent, China’s largest Internet company by market value. The founder of search engine Baidu Inc., Robin Li, ranks third among China’s richest.