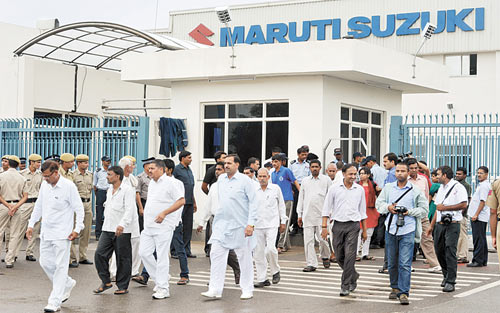 08 November, 2014
Print this article Font size -16+
Think local, act local. That’s the message panchayat pradhans (village chiefs) in and around Manesar put across to Maruti Suzuki when it reopened its Manesar plant. They want Maruti to hire more people from the neighbourhood. “It will give us a certain measure of control over the workers. We will be able to ensure there is no violence and strikes in the future,” says Ramesh Pradhan, a representative of a local governing body.

However, heads of Japanese firms operating in India are believed to be of the view that it is better not to rely on workers from areas around plants. When contacted, a Maruti spokesperson said: “It (the proposal) is under consideration, but a decision is yet to be arrived at.”

The demand for more local labour rose after a supervisor was murdered on July 18 in violence between workers and the management. It was blamed on contract workers who are paid much less than permanent staffers. This is said to be the root cause of the violence in the factory. “We are with the company, but to solve this (anomaly), they need to take more locals who can then control workers,” says Samundhar Singh, a local panchayat leader.

Already, more than 700 workers out of the 3,300 at the Manesar plant are from Haryana. A little over 20 per cent, that’s as local it gets.