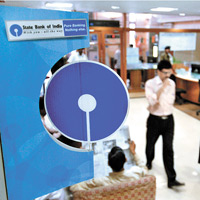 You can now get home and car loans from the State Bank of India (SBI) up to 50 basis points (bps) cheaper, effective 7 August. The country’s largest public sector bank, with a market capitalisation of Rs 1.3 lakh crore, will now offer home loans of up to Rs 30 lakh at 10.25 per cent (10.50 per cent earlier); for loans above Rs 30 lakh, but less than Rs 75 lakh, it will be 10.40 per cent (10.75 per cent). The new car loan rate will be 10.75 per cent (11.25 per cent) for a seven-year loan; the bank will soon announce rates for three- and five-year car loans. SBI’s move comes on the heels of the Reserve Bank of India’s move to slash the SLR (statutory liquidity ratio, which means the amount of deposits that have to be invested in government bonds and other liquid assets) by 100 basis points to 23 per cent. But the bank has not cut its base rate, or the rate below which it cannot lend; it stands at 10 per cent. Due to poor corporate demand for funds, SBI has also cut rates on wholesale loans.

Easing Bottlenecks
In a move that could remove bottlenecks in availing clearances for public-private infrastructure projects, the Prime Minister has relaxed norms for transferring state-owned land to other entities. Now all cases of land transfer from ministries to statutory bodies or public sector units will be allowed provided they go by relevant laws. The PM’s decision dissolves a ban imposed last year and will do away with the need for Cabinet approvals, which usually take months and cause significant delays in infrastructure projects.

Call it a sign of the times. Adani Power, an arm of the Adani Group, posted a consolidated net loss of Rs 810 crore for the quarter ended June, against a net profit of Rs 181 crore a year ago. The company says the high price of imported coal and the non-availability of transmission lines triggered the loss. Adani Power posted a 75.6 per cent growth in sales to Rs 1,501.88 crore as it sold 4,546 million units of power in the first quarter of this fiscal, against 2,898 million units in the same quarter last year.

Tough Times
Sportswear major Adidas has said that the global sales of its Reebok brand fell 26 per cent during April-June on a “currency-neutral basis”, mainly due to the impact from the scam-hit Reebok India. In May, Adidas had alleged a Rs 870- crore fraud at its India arm and accused a few former top executives of fudging accounts. The group now says it expects a hit of `70 million in its global operating profit in 2012 due to irregularities in Reebok India.

Spice Route
SpiceJet has returned to profits after five successive quarters of losses. The airline surprised the industry as it posted a profit of Rs 62.4 crore in the quarter ended June. But there are questions over the results. According to reports, the carrier received a one-off sale and leaseback profit worth Rs 39 crore during the quarter. If this amount was excluded from profits, it would push the airline into losses once again. That said, SpiceJet says deploying its aircraft in a commercially sensible way and opting out of non-profitable networks worked in its favour.

Ratings Row
Popular television network NDTV has sued Nielsen for $1.3 billion, accusing the market research giant of tampering with viewership data to favour other networks. The move could become one of the biggest corporate cases involving an Indian company. NDTV has filed a case in a New York court and wants “compensatory and punitive damages” from Nielsen, Kantar Group, TAM Media Research and few Nielsen directors, including its global chief executive David Calhoun, for causing financial loss and loss of reputation and brand value by releasing incorrect data.

Tech Tangle
As two of the world’s leading tech giants battle it out in the open, more wrangling is on the way. Apple this week lashed out at Samsung’s behaviour in a court filing saying “litigation misconduct is apparently a part of Samsung’s litigation strategy”. Samsung had charged that the Apple iPhone was a copy of Sony’s smartphone and Walkman designs.