Loaned To The Limit 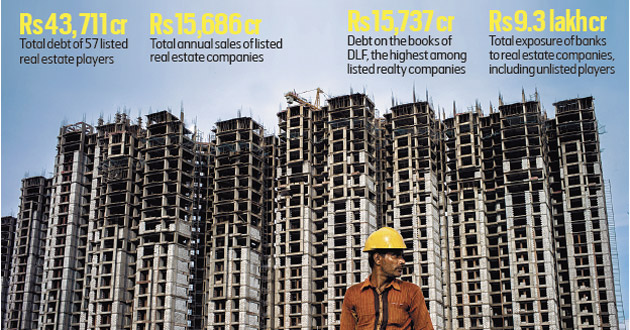 08 November, 2014
Print this article Font size -16+
To buy or not to buy? That is the question most buyers across the country are faced with when it comes to real estate. While there are indications that the economy is on the mend, with a stable government in place at the Centre, there are still no signs that the positive sentiment among buyers will translate into a buying decision. Besides, prices remain high and beyond the reach of most buyers.

Buyers have seen at least two cycles of boom and bust in real estate in the past eight years. In 2005-2008, when the economy was booming, so were real estate prices. But when the economy began slowing down again in 2010, prices refused to come down. Even as real estate developers cribbed about falling sales throughout 2012 and 2013, the biggest cities in the country saw prices in the residential segment remain static in most areas, and dip a bit in some.

With a new government in power and a host of sops announced in the Budget, the real estate sector is expecting customers to return to their buying ways. But it’s a long journey, especially with most developers facing huge pressures on their balance sheets as debt is still not under control.

But the sector can take heart from the substantial demand-supply gap in housing that India faces. With demand expected to be around 12 million units by 2017, supply will only be around 55 per cent of that number, says a report by Cushman & Wakefield, a real estate consultancy. That is a gap of 45 per cent. The report says around 2.8 million units will be required in just the top eight cities.

Strangely, developers seem to be catering only to the top of the pyramid as far as the residential segment is concerned. While most of the demand is at the bottom of the pyramid in terms of number of units, supply is the least in that segment. The developers’ focus on high-income housing is driven by the lure of higher margins, while middle- and low-income housing are low on their list of priorities.

Debt Trap
As matters stand today, the biggest problem real estate developers face is of debt on their balance sheets. As of July 2014, the total debt on the books of the 57 real estate companies listed on BSE/NSE is more than Rs 40,000 crore. The overall debt of the sector, which has many unlisted players as well, is in the region of Rs 9.3 lakh crore. Real estate accounts for 16 per cent of banks’ lending.

DLF, which is the biggest real estate company by market capitalisation in the country, had a debt of Rs19,064 crore in the first quarter of the financial year (June-end). Industry trackers are blaming lower cash flows due to slowing sales for the high debt of the realty players.

Some of the other real estate players who have high debt on their balance sheets are Anant Raj, Godrej Properties, HDIL, Hubtown and Indiabulls with debts of Rs 1,388.69 crore, Rs 1,665.28 crore, Rs 3,143.34 crore, Rs 1,432.66 crore and Rs 1,052 crore, respectively. In terms of debt-equity ratio, DLF, Ansal and Puravankara are on the higher side amongst the big real estate companies, say industry trackers.

The whole cycle of debt began during the boom of 2006-07 when many realty players decided to get aggressive. While big players like DLF and Unitech harboured aspirations of going national, and bought land parcels in cities like Mumbai and Bangalore, others, including unlisted players, too entered new territories. A company’s net worth began to be measured on the land bank it possessed. Hence started the trend of acquiring as much land as possible as that would determine the company’s valuation. Many a real estate developer, eyeing a listing on either the BSE or NSE, bought land parcels in the hope that it would result in a better valuation.

But what actually happened was that the debt acquired to buy these land parcels kept piling on the books of developers. The latter then turned to private equity players. This happened as banks became cautious about lending to the real estate sector. The PE players entered the segment quite aggressively. Most of the deals were structured at the project level — through special purpose vehicles (SPV) — in a bid to ensure the PE made a exit.

PE players began funding projects that were either too ambitious or faced hurdles to raising initial investment from banks. Of late, many PE funds have floated NBFCs to offer rates that are lower than those required of a PE investment. Typically, PE players expect returns of around 24 per cent from their real estate investments while NBFCs tend to lend to the sector at around 15-18 per cent. “We (PE players) cannot compete with banks in terms of interest and return expectations. Around two years ago, we started an NBFC platform for the real estate sector, and now we have combined it with our PE platform to offer construction finance and PE investment,” says Khushru Jijina, managing director, Piramal Fund Management. In May this year, Piramal merged its real estate private equity business — Indiareit — and its NBFC Piramal Finance.
break-page-break
While debt remains a concern for the real estate sector, the Budget has got all the players excited. Many are hopeful that they will be able to substantially reduce their debt by the end of fiscal 2015. “There has been a change in sentiment among buyers and we are hoping that this will result in sales, especially around Diwali. Sales will first increase in the residential segment and the commercial segment is expected to grow as economic growth increases,” says Rajeev Talwar, group executive director, DLF.

The Way Out
The big boys of the industry are focusing on reducing debt, with many exiting non-core businesses. DLF, in February this year, sold its luxury hospitality chain Aman Resorts for $358 million (Rs 2,230 crore). The company has sold land parcels bought in Mumbai and Pune. DLF has also hit upon another interesting cash flow model — selling plots. Many other companies, including New Delhi-based Unitech, have adopted this strategy of selling plots.

Real estate players based out of Mumbai too are adopting new strategies. Many of them have begun re-branding their schemes as luxury projects. A whole set of developers, including unlisted players like Lodha Developers, Hiranandani, Lokhandwala and Raheja, are now focusing on luxury projects. Again, many cash-strapped developers have converted mall development plans to residential projects in the past three years to increase cash flows.

Developers in Mumbai Metropolitan Region and National Capital Region have an unsold inventory of more than 300 million sq. ft. This is expected to take at least 45 months to clear even if demand were to pick up, according to Liases Foras, a real estate consultancy. To lure buyers, many developers are now offering smaller apartments. “We are seeing the majority of our bookings coming for apartments sized between 600 sq. ft and 1,200 sq. ft. There is certainly a jump in demand for middle- and lower-income houses but it will take at least a year or two before buyers return to high-end projects,” says Hari Prakash Pandey, vice-president, finance and investor relations, HDIL.

Such is the extent of optimism among some developers that they are even contemplating raising more debt. “We will be looking at buying projects and land parcels from desperate developers. Debt may increase on our balance sheet due to this, but it is not a worry,” says Goel of Omaxe.