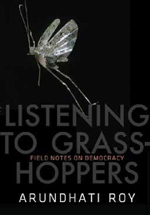 In this compilation of "self acknowledged infuriated" writing, Arundhati Roy's deeply political essays serve as more than an indictment of the current state of Indian democracy. They question the very idea of democracy as a system of governance, which Roy says has outlived its effectiveness. Beginning with her condemnation of the Gujarat riots of 2002, all the way to the 26/11 terror attacks in Mumbai, the author demonstrates how the society — the government, corporate powerhouses and the media — function in an increasingly un-democratic fashion. Roy concludes on a deeply pessimistic note, predicting an imminent collapse in India's near future.