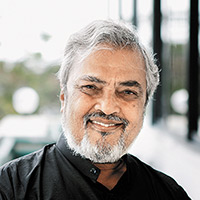 31 March, 2015
Print this article Font size -16+
I was once in a golf cart with Dr A.P.J. Abdul Kalam, now an ex-president of India but at that time six months from the presidential post, and N.R. Narayana Murthy, co-founder and chairman of Infosys at that time. Introduced by N.R. Narayana Murthy to Dr Kalam as the leadership expert, I was asked by the future president, ‘Do you really think leaders can be made? Don’t you think they are born? Either you have it or you don’t, isn’t it?’ Given that these were two self-made men who had achieved iconic status by dint of their own mettle, by the sweat of their souls so to say, the question was clearly rhetorical...and the right answer is, or ought to have been in their company, ‘Of course sir, they are for

sure born and not made.’ Mercifully, our journey ended in 50 seconds at a hall where the imminent president was going to speak and I was spared the task of expounding my wisdom on this thorny issue of ‘nature vs. nurture’ or ‘heredity vs. environment’, as applied to this phenomenon of leadership.

Leaders Speak
Do you think leaders are born? Is leadership in one’s genes? How much, if any, is ‘made’?

N.R. Narayana Murthy, Co-Founder and Chairman Emeritus, Infosys
‘Often people ask me whether leaders are born or made, and I have always said that each one of us has leadership attributes latent in us, sometimes it is quite alive in a different context.’

Vivek Mansingh, Chairman, AxisCades; former Head, Dell India; Cisco, India
‘I have worked with five phenomenal leaders from the IT industry: Dave Packard, Bill Hewlett, Michael Dell, John Chambers and Steve Jobs. They are all extremely different people. What I have seen is that they have one key strength and then they develop other skills. For Steve Jobs, for instance, creativity was his hallmark…he is an out-of-the-box thinker. He can develop other capabilities like communication skills and an ability to inspire—that he can develop. So my take is that if we can find people who have at least one or two strong skills that are required, the rest you can groom or make it happen. In a nutshell, my answer is that we can create leaders. 90 per cent of people can be trained into becoming better leaders. If these people are exposed to structured information, monitoring and coaching, and if they are taught to approach problems with a certain attitude, they will become better leaders.’

Rajiv Kuchhal, former Infosys employee and former COO, On-mobile
‘Some are born to be leaders; some make themselves leaders. I think it’s true, all of them are true. I do believe that there have to be innate leadership skills; there is clearly something inherent. I have sometimes been thrown into a position—it’s what you have to do to step up to and do it—but again the question is, what is leadership? So, if leadership is the ability to influence people so that you achieve your objectives, then you can actually do it by learning. I have seen people stepping up to the occasion after they have been cajoled, pushed and thrown into the deep end of the water. I think there is some of it in all of us, it’s just that some are more fearless about it, and some are fearful about it. So, one of the best things I’ve heard about [whether] leadership is born or built is that it is like a sport. Everybody can run, but not everybody can be an Olympic champion. The people who are Olympic champions have to be natural runners, but if you run every day you can be a good runner, and I think that leadership is about the same. Some people have natural leadership abilities, but some others continue to practise and be aware that they can suddenly perform a leadership role.’

Ashok Kamath, Managing Trustee, Akshara Foundation, and Ex-CEO, Analog Devices India
‘MBA stands for Master of Business Administration. It doesn’t say Master of Business Leadership, so it is training you to have a mastery over processes and functions. Leadership is, to my mind, this combination—some of it inherent + some acquired + some little bit thrust upon oneself. Plus, experience and wisdom over the years. You really build the skills. I am a better listener today than I was 20 years ago. This helps me address my role better today, given the nature of the organization that I am in now. I can’t possibly use the techniques I used in (a famous firm) in this environment. So, how did I acquire it? I had to listen; I had to appear as the dumb guy for the first 2–3 years. Then, when you are able to grasp it, articulate and push for it, make it happen—then, the acceptance happens. So, I think it’s the born + thrust upon perspective + experience and wisdom gained over time. Can it be taught?

I don’t know if it can be taught, if you didn’t have, let’s say 7–10 years of experience. You should be able to relate your life to the education that is offered: “This is similar to this, therefore I made a mistake there or did well there.” That builds on you, I think that’s where the leadership development is—being able to apply what you are “taught” to your life experience, and hence come to your own internalizing.’

Experience or Training?
If you are from the school of hard knocks, you may say, ‘Experience is not just the best teacher; it is the only teacher.’ To think, let alone accept, that what you have learned over the period of a lifetime can be canned or bottled and taught to greenhorns, wet behind the ears, and lo and behold, they’ll emerge from the phone booth with a cape on, ready to leap from tall buildings—many from my generation would shudder at this sacrilegious assumption. They would mutter, ‘What is the world coming to?’ As the curmudgeonly swimming teacher said, ‘Oh yes, my methods are very sophisticated. I drop the kid on the first day into the deep end. No other way. You may lose some, but that is the price you pay for learning how to swim on your own.’ This is the faction of the group that believes, ‘If you can’t stand the heat, get out of the kitchen,’ as Truman said. (When was the air conditioner invented?!).

To all this we have to respond, ‘No, this programme is not a substitute for experience. It intends to prepare an aspiring great leader to know what to experience and then how best to learn from it.’ To paraphrase Ramakrishna Paramahamsa (one of my favourite parable men), a bullock which goes round and round a milling stone works for an eternity without gaining any expertise on what is being produced as a result of its mind-numbing labour. The same arguments have been advanced every time professional education has been proposed in any discipline—medicine, law, business, arts, literature and so on. The only major field of human affairs in which this philosophy of ‘experience comes before learning’ still prevails is politics—and look where it has got us. (Sorry, that was a cheap shot. I take it back. There are very good politician leaders out there. I’ve met some of them, but alas, they may not be with us for long.)

All through history, there has been a tradition of educating kings with knowledge specific to matters of the state, even if the royal students were often indifferent or indolent and the rajaguru—Sanskrit for the royal teacher—may have despaired at the prospect of that particular ignorant lout holding the destiny of the kingdom in his hands. (We are not the first ones to feel that way, I’m certain.) The most famous leadership development programmes in history were taught by these legendary teachers: Confucius (551–479 bc) taught the Shu, Ji and Meng families; Kautilya (350–283 bc) taught Chandragupta Maurya (340–298 bc); and Aristotle (384–322 bc) taught Alexander (356–323 bc). Many ‘gurus’ theorized and prescribed guidelines for the conduct of the ideal leader. The most famous among them were Plato (427–347 bc) with his concept of a ‘philosopher king’ in The Republic, Machiavelli (1459–1527 ad) who authored The Prince, and Kautilya who wrote Arthashastra. Roman emperors and senators were often, but not always, scholars. Marcus Aurelius (121–180 ad) was a philosopher and an emperor. Greek scholars were the ‘gurus’ for many  Roman emperor, often as honoured, well-paid slaves. (‘Nothing much has changed,’ mutters my leadership development consultant friend, after a sneak preview of this sentence.)

This ancient and hallowed tradition of future leaders who inherited their mantle in a dynastic way, preparing themselves formally for the role they would play (more ‘followed in the breach than in observance’), fell into disuse under tyrants, of whom there were many. Some tyrants like Genghis Khan were probably autodidacts. And the Kings of England were most often unlettered. All the development of leadership took place on the battlefields, and they were respected for their roles as warrior-leaders.

However, with the advent of democracy, leaders were chosen on the basis of popularity and were no longer required to be formally trained for their role. The death of leadership development in a formal manner, and any expectation that leaders should be developed and not just thrust upon people with no preparation, dates from the birth of democracy, of PROBE. (Alas, what price to pay for freedom and equality! Democracy comes with a heavy price tag—there is no special knowledge demanded and no other qualification needed to be declared a leader, except a victory by one vote at the polling booth.)

A Good Leader
But before we can train good leaders, we must know what a good leader is. Imagine you are on the board of directors of a corporation, a sports team or a hospital. Please write down the top five attributes of a good leader for this entity. Don’t evade the question by asking for the context. Just ask yourself the following question and write down your answer after thinking for a few seconds: what do you think are the five ‘generic’ qualities you would want in your leader if you had a magic wand and could create such a person?

When I asked this question to a group of faculty and consultants in a leading leadership development institute, here are just some of the 63 attributes listed by just 10 of them, and then I ran out of flip-chart paper:

As seen by ten experts: Simplicity / trustworthiness / faith in the people and the team / sensitivity towards the needs of the team / sacrifice / listening / speaking / honesty / dedication / integrity / principles and values / clarity of vision / passion / leadership by example / knowledge / open to new ideas / unselfish / unconditional / team builder / team player / task achiever /... Please! Who do you know who can walk on water? What can we do with such an extensive list? And can we really expect one person to have all these qualities? A recruiter will give up and resign if you, as the directors, gave him or her this list of requirements. And this was only part of the list suggested by the 10 of the 20 people in the room, and they were all experienced consultants and former executives.

With permission from  Maven (Rupa Publications)