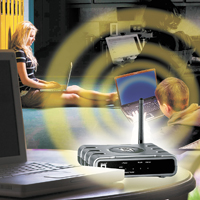 In a seemingly magnanimous gesture, google last month announced that it would pay for maintaining Wi-Fi connectivity in 47 airports in the US. The search giant's announcement came close on the heels of eBay pledging to provide free Wi-Fi in 250 Delta Airlines flights this holiday season.

Various other companies are also sponsoring Wi-Fi in the US and around the world, hoping that users will also bring them some business. Google hopes that people will use some of its products while on the network. Microsoft says it will provide Wi-Fi connectivity in airports and hotels, provided the people use its search engine Bing. And eBay hopes people will shop on its website.

This sudden fondness for Wi-Fi is bound to have a big impact on the widely-used wireless access technology. Thanks to smartphones and other handheld access devices, Wi-Fi is now the clear winner in short-range wireless access technology. And with the higher speeds of the 802.11n standard, and the proliferation of hotspots, Wi-Fi could compete with other wireless access technologies such as broadband wireless, WiMax and femtocells, although they are very different in nature and not meant to compete with each other. Free Wi-Fi may make all of these unnecessary as all devices are now Wi-Fi enabled. Moreover, the development of virtual Wi-Fi in Windows 7 could make it even more a joy to use.

Virtual Wi-Fi is a technology developed by Microsoft Research. It uses the well-known principle of virtualisation, the process by which one piece of hardware is converted into several by the software. It is a powerful tool in servers to increase hardware capacity. If you have Windows 7 in a laptop, you can turn it into multiple wireless adapters. In practice, this lets you connect to multiple networks at the same time. More to the point, each laptop can repeat the signal as it connects, thus expanding the network even more.

A new variation of Wi-Fi called Wi-Fi Direct, to be incorporated into devices next year, will allow inter-connectivity among devices without a router. One of the many applications of this technology is video streaming from a PC to a television without wires. It is supposed to lead to new software applications that would let users identify colleagues and friends, and share data. There is no doubt that Wi-Fi Direct would threaten Bluetooth, but it is the arrival of WiMax that is the current threat to Wi-Fi. Also, while Wi-Fi is free, WiMax access is chargeable. How these two technologies would compete in the next five years is to be seen, but for now Wi-Fi is firmly entrenched.

This does not mean that Wi-Fi is without its faults. One problem that has prevented its adoption in homes is its latency. Wi-Fi is great for data transmission, and would also work fine if you stream video to your PC (it would download the video and then play it, thus preventing latency). But if you connect, for example, your DVD Player to your television through Wi-Fi, you would begin to feel the limitations of the technology, particularly if you are playing high definition video. Latency is okay for data but not for streaming video.

Currently, only Ultra wideband technology has the capability to stream video flawlessly for short distances, but it is too expensive.

It is being adopted currently in hospitals, which can afford the extra cost, but it could take 2-3 years before the cost comes down for it to reach homes. Till then, we all can rely on Wi-Fi for short range video transmission.