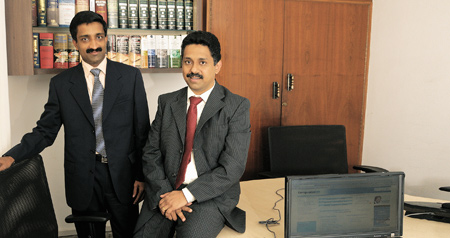 Binoy Chacko, 38, is a promoter of CompaniesInn, a consultant group of company secretaries, and India's second registered LLP (limited liability partnership) after Delhi-based legal consultants Handoo & Handoo. But despite being an LLP, companiesInn continues to operate as a regular partnership. "We are not allowed to work (as an LLP). if we were allowed, we would be the first to opt for it," says Chacko. The problem: the regulatory body, the Institute of Company Secretaries of India (ICSI), does not recognise LLP as an entity because the laws governing company secretaries were enacted before the LLp law was passed.

This is just one of many problems that are putting the brakes on the expected rush to form LLPs, a corporate entity that combines the limited liability benefits of a company with the flexibility of a partnership. Instead of the deluge of registrations that the Ministry of Corporate Affairs (MoCA) was expecting after the LLP Act, 2008 — one of the most significant legislations of recent times — was notified in the official gazette on 1 April 2009, only 350 LLPs have registered as on 9 november. The Act allows lawyers, chartered accountants and venture capitalists to form LLPs, and also allows existing partnership firms, private limited companies and unlisted public companies to convert to LLPs by registering with the Registrar of Companies (RoC).

Industry watchers pin the blame for the slow pace of conversion on MoCA for pushing the Act through without doing its homework. From non-recognition by regulatory bodies to unclear guidelines on raising foreign direct investment (FDI), to conversion problems to lack of clarity on taxation matters, to confusion on exit routes — the LLP is besieged with myriad hurdles. The spokesperson of MoCA, Avinash K. Srivastava, says the ministry is aware of the crawling speed of LLP registration and is committed to help the process.

Innumerable Bottlenecks
Typically, a new law takes time to settle down.  For example, when value-added tax (VAT) was effected, there was ambiguity, as different states had there own slabs. New laws tend to have a lot of gaps and sometimes overlap with existing laws, and require several adjustments. The LLP Act is now in that phase, as it attempts to evolve from a good idea and a bare-bones law to a more rounded one that takes into account the requirements of all stakeholders and associated laws.

For example, the biggest problem facing LLPs is non-recognition by regulators of professionals such as architects, actuaries, chartered accountants, cost accountants, etc. For that to happen, amendments are required in the parliamentary acts governing these professionals. "MoCA has already amended the respective acts making way for multi-disciplinary partnership firms, but the acts governing their individual professions are yet to be amended to incorporate this new form of business," says Brijmohan Sharma, vice-president of Institute of Cost and Work Accountants of India (ICWAI). MoCA officials say they are talking to representatives of Institute of Chartered Accountants of India (ICAI), ICSI and ICWAI to look for ways to allow the professionals governed by these regulators to work as LLPs.

There are other hitches, too. According to Pranay Bhatia, partner at Mumbai-based Economic Laws Practice (ELP), the present structure of the Act creates ambiguity about raising FDI. If LLPs are treated on a par with companies in this regard, then foreign investors would need to obtain approval from Foreign Investment Promotion Board (FIPB) before making investments. "Though it has been clarified that for tax purposes, LLP would be treated on a par with partnership firms, a clarification in this regard is awaited for FDI purposes," says Bhatia.

Taxation again has its own set of problems. According to Shefali Goradia, partner at Mumbai-based BMR Advisors, there is no clarity on the treatment of reserves in case a small company converts into an LLP. "There is a big question mark on the income tax status, the impact on tax holidays, carry forward and set-off of losses," she says, adding that it is also not clear whether banks and financial institutions (FIs) are willing to lend to LLPs.

Apart from banks and FIs, lack of recognition by, for instance, Securities and Exchange Board of India (Sebi), means LLPs cannot go public. Similarly, with bodies such as Reserve Bank of India (RBI) and Insurance Regulatory and Development Authority (Irda) not recognising LLPs, professionals remain in a fix. What is also holding back the LLP rush is the lack of clarity on the process for exiting an LLP business. MoCA officials had told BW in August (see ‘Preparing The Exit Route', BW, 31 August 2009) that the file on this issue had been sent to the law ministry for study and suggestions.

State government regulations are another stumbling block. Setting up shop in a technology park in Kerala, for instance, requires one to be registered as a company under the Companies Act. There are several other areas — such as tenders of PSU, government projects and sez (special economic zone), et al — where for government contracts, an entity has to be either a company or a partnership.

Not A Bad Idea
Despite all the problems, though, the concept of LLPs continues to find takers in India. companiesInn, for instance, has helped 25 of its clients register themselves as LLPs, even though it continues to work as a partnership itself because the ICSI does not recognise LLPs.

Also, not too many people are aware of the LLP Act and its benefits. MoCA's Srivastava says the ministry has asked all RoCs and regional directors to organise awareness drives. What might also help is that most partnership firms  are small and medium businesses that are family driven. "As people from a similar trade have a herd approach, publicity is by word of mouth," says K.H. Viswanathan, executive director of Mumbai-based RSM Astute Consulting Group. "Once the benefits are effectively communicated, a large number of partnership firms will convert into LLPs."