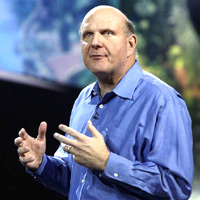 Microsoft Chief Executive Steve Ballmer has said he sees such phones - of which Nokia shipped more than 50 million last quarter - as an entree to more expensive fare.

"We look at that as an excellent feeder system into the smartphone world and a way to touch people with our services even on much lower-end devices in many parts of the world," he said in a conference call to analysts on Tuesday.

"The devices business, especially the non-smartphones business in emerging markets, is a completely different dynamic," he said.

Kolla pointed to the need to manage tight supply chains, distribution, and building brands through word-of-mouth. "Microsoft doesn't have it in its DNA to run operations at this level," he said.

India is a case in point. Nokia has been there since the mid 1990s and the country accounted for 7 per cent of its 2012 revenue while the United States generated just 6 per cent, according to Thomson Reuters data. Its India roots run deep: it has a presence in 200,000 outlets, 70,000 of which sell only its devices. One of its biggest plants in the world is in the southern city of Chennai.

For sure, Nokia has slipped in India as elsewhere: After nearly two decades as the market leader it was unseated by Samsung Electronics Co in overall sales last quarter.

But it still sold more of its more basic feature phones.

As recently as last October, market research company Nielsen ranked it the top handset brand. The Economic Times ranked it the country's third most trusted brand.

Loyalty Runs Deep
In a land of frequent power cuts and rugged roads, the sturdiness and longer battery life of Nokia's phones have won it a loyal fan base - some of whom have stayed loyal when trading up.

Take Sunil Sachdeva, a Delhi-based executive, who has stuck with Nokia since his first phone. He has just bought his fifth: an upgrade to the Nokia Lumia smartphone running Microsoft's mobile operating system.

"Technology-wise they are still the best," he said of Nokia.

But Microsoft can't take such loyalty for granted. Challenging it and Samsung are local players such as Karbonn and Micromax, which are churning out smartphones running Google Inc's Android operating system for as little as $50.

Such players are also denting Nokia's efforts to build its Asha brand, touchscreen devices perched somewhere between a feature phone and a smartphone.

Nokia shipped 4.3 million Asha phones globally in the second quarter of this year, down from 5.0 million the previous quarter.

"The sales performance of the Asha line has been quite poor," said Sameer Singh, Hyderabad-based analyst at BitChemy Ventures, an investor in local startups. "With increasing competition from the low-end smartphone vendors, I'm unsure how long that business will last."

That leaves the cheap seats. Singh estimates that the Asia Pacific, Middle East and Africa accounted for two-thirds of Nokia's feature phone volumes in the last quarter, at an average selling price of between 25 to 30 euros.

"I don't see how Microsoft can really leverage this volume," he said. "The market is extremely price sensitive and margins are racing into negative territory."

Too Big To Ignore
The quandary for Microsoft is that while the basic phone market may be declining, it may simply be too big to ignore.

"If you look at markets like India and Indonesia, more than 70 percent of the volume comes from the feature phone business," Anshul Gupta, principal research analyst at Gartner said. "It's still a significant part of the overall market."

That means that if Microsoft wants to herd this market up the value chain to its Windows phones, it needs to keep the Nokia and Asha brands afloat - while also narrowing the price gap between its smartphones and the feature phones and cheap smartphones.

Microsoft has hinted that lowering prices of smartphones would be a priority. The Windows Phone series includes the top-end Lumia 1020, which comes with a 41-megapixel camera, while it also sells simpler models such as the Lumia 610 and 620 aimed at first-time smartphone buyers.

"The lower price phone is a strategic initiative for the next Windows Phone release," Terry Myerson, vice president of operating systems said on the same conference call, while declining to provide details.

An option for Microsoft, analysts said, would be to shoe-horn services like Bing search, Outlook webmail and Skype, the Internet telephony and messaging application, into the lower-end phones as a way to drive traffic to those services and make the devices more appealing.

"So you can bundle services with these low-end products and that way you can reach a wider audience," said Finland-based Nordea Markets analyst Sami Sarkamies.

But in the meantime Microsoft needs to brace for assault on all fronts as emerging market rivals see an opportunity to eat further into Nokia's market share. In India, said Convergent Catalyst's Kolla, cheap local Android brands have been held back by Nokia's strong promotion of its mid-tier Asha brand.

"Now, I expect them to pounce," he said.