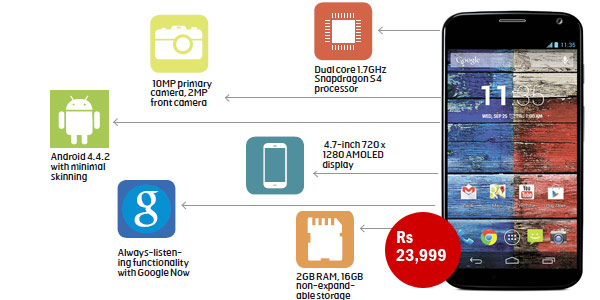 08 November, 2014
Print this article Font size -16+
Somewhere near- by is a mom who’s at her wit’s end. She gave in to her daughter’s demands for a Moto X ­— and now the young girl is not to be seen. She’s closeted in her room with her fluffy cat. One of them gets a lot of sleep and the other is supremely busy talking to her phone — and I think we know which is which.

Obviously, the Moto X was the right choice for her.

The Moto X went through such a bubble of hype in the US, that until the phone came into India about six months later, it was difficult to figure out what the fuss was all about. You could get the handset’s chasis customised and Americans were particularly frothy about a wooden or leather look, but you could always achieve the same look with a case, so I’ve never understood why that is such a big deal.

What I thought was much more interesting — and a hint at the direction software on mobiles will take in the future — is how the Moto X is “always listening” and responding to you with Google Now. Like with Google Glass and Android Wear watches-to-be.  And this has to be experienced to be understood. The Moto X can be sitting around close by, screen off and dark, and all you have to do is say “OK Google Now…” and it’ll ping awake for a command. We’ve seen Google Now do that when on a search page on the web, but this is different because it means another level of ease. You could be drifting off to sleep when you remember you need to wake up early at 7 am. Don’t move — just say “OK Google Now, wake me up at 7 am”. In the unlikely event that you find yourself arguing with friends over the height of the Empire State Building, just call out to your Moto X. Actually, so many have asked Google Now exactly that question that it must be heartily sick of it and soon it’ll tell you even before you ask.

There are lots of things you can ask Google to do. Just say “Help me” to get the list which includes the weather, reminders, directions, making calls, texting, scheduling meetings, etc. And each time, Google Now will greet you personally, by name. You can also get an unfortunate Indian accent, if you like.

While other companies get their phones to race for spec after spec and feature after feature, Google has really got a winning formula with that personal touch.

Another aspect that makes the Moto X a great experience is its sheer smooth working. It doesn’t have the fastest processor, the sharpest screen or the maximum possible RAM but instead it has two other processors that keep it in the always-listening mode and sensing movement without draining the 2,200 mAh battery. It’s an innovative idea, smoothly executed. The Moto X runs on Android 4.4.2 and apart from some Motorola apps, is really all Google.

The camera on the Moto X has been a disappointment for many. But I’d submit that this will be the case only for those who are looking for evolved phone photography. For casual users, like the young girl with her cat, the camera is a piece of wizardry. The camera app is simplistic and upsets those who want to tinker with ISO and white balance and exposure, but is an intuitive one-hand operation for those who want to just take quick fun shots. The camera comes to life with a twist of the wrist, even when the screen is off. The lock screen is another innovation — touch the notification without unlocking to see what it’s all about.

The design is plain and premium. Minimal edges make the screen — which is great looking despite less than top-end pixel counts — stand out well. And all this is at a price that, so far, Indians have no quarrel with — Rs 23,999.
(This story was published in BW | Businessworld Issue Dated 02-06-2014)
Tags assigned to this article:
mala bhargava magazine google google now motorola moto x magazine 02 june 2014 samsung galaxy note pro