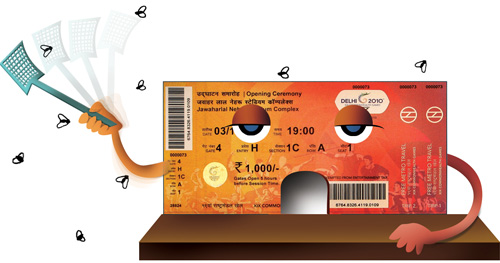 08 November, 2014
Print this article Font size -16+
Al Carter, an American sports journalist, once said that the discus competition wouldn't attract much interest until athletes began throwing them at each other. A lot of accusations have been thrown around in the fiasco surrounding India's preparations for hosting the Commonwealth Games (CWG), but that hasn't helped ticket sales much. If anything, they have served to turn people off.

On 4 June, Delhi's lieutenant governor Tejinder Khanna received the first ticket to the CWG. Since then, only about 250,000  tickets — out of a targeted 1.7 million — have been sold. To be fair to the Organising Committee (OC), chaired by Suresh Kalmadi, one reason for the dismal ticket sales could be termed ‘technical': online ticket sales — the first round — did not work out because of a glitch in the system. A similar problem occurred in the run-up to the Beijing Olympics, too, when the systems crashed. Even when interested buyers went to the designated Central Bank of India offices where tickets were supposed to be sold over the counter in the second round of  sales from 1 August, many came back disappointed; the bank was not yet set up to handle the logistics.

Most tickets sold thus far have been for the opening and closing ceremonies, though: both of those events are almost sold out, despite high ticket prices (from Rs 1,000-50,000). These ceremonies are likely to be highly entertaining — the operating budget for the opening ceremony runs upwards of Rs 150 crore, according to some insiders — where popular Bollywood stars will strut their stuff. But for the competitive events themselves, an otherwise enthusiastic sporting nation does not seem to be sporting enough to ‘get out and play'.

In the 60,000-seating capacity at the Jawaharlal Nehru Stadium, the opening ceremony is expecting an in-stadia viewership of 54,000. Eleven thousand tickets, which were made available at Rs 1,000, reached house full a few weeks ago, while about 12,000 tickets of the Rs5,000-category hit the house-full mark early this week. Of the Rs 50,000 and Rs 25,000 varieties — 4,500 seats each — 2,500 and 1,500 have been sold, respectively. The remaining 22,000 seats have been reserved for sponsors and other government officials, athletes and other sporting authorities.

Tickets for field, track and other CWG events are still available — for Rs 50-1,000. But these haven't been popular. Even for events where Indians have won Olympic medals, like boxing, occupancy in the 2,700-seat Talkatora Stadium is likely to be less than 50 per cent. Hockey seems to have drawn a better, but still lukewarm response, accounting for about 10,000 tickets, according to officials. In fact, information about ticket sales has been scarce, and officials have been tight-lipped about the actual numbers.

Kalmadi may have been over-ambitious when he suggested that CWG would rival the Beijing Olympics. The OC had envisaged selling about 1.7 million tickets in all, with expected revenues of Rs 60 crore. However, ticket sales till 20 September generated just under Rs 11 crore, though the number of tickets sold is not available; merchandise sales were Rs 80 lakh. Cynics say the Australian cricket team's tour of India will generate more interest than CWG.

By comparison, the Beijing Olympics 2008 sold a record 6.8 million tickets, but at many venues, stadiums were sparsely filled. Chinese officials acknowledged the concern at that time, but attendance did get better. Media reports suggested that the Chinese government bussed in ‘cheer squads' to fill the seats. Perhaps we will emulate the Chinese in this regard?