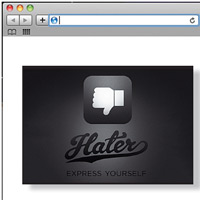 08 November, 2014
Print this article Font size -16+
The world of apps has seen a brand new entrant: the Hater app. Finally, you have got a platform to vent the rage that those never-ending traffic jams build up; the frustrations of pay cheques incommensurate with long shifts; the disgust at the sight of betel juice-stained walls; and, for everything else that triggers your distaste buds.

The Hater app lets you air it all and, in the process, allows for a catharsis of sorts by letting you bond with fellow haters. You can post pictures of things you hate, caption them, share them with a dedicated Hater community, see the feed from other posts and comment. The most hated items will appear on top of the hate list in a real-time feed. You can always tweet or post things that irk you on other social media sites, but what differentiates the Hater app is that it is meant to be a dedicated channel for venting and, thereby, diffusing hate.

The app has been launched for the iPhone, and Android users will have to wait for a few more months. No points for guessing what their first hate messages will be.

Talking Heads
No fewer than 123 heads of state had Twitter accounts, either personal or through a government office, as of December 2012 — a 78% spike over the previous year — reports communications agency Digital Daya.

Kiran Mazumdar Shaw
@kiranshaw
Bureaucracy is stifling growth in our country. Barring a few, most bureaucrats are either rajas or slaves of the Approval Raj!