Less Is More In Packets 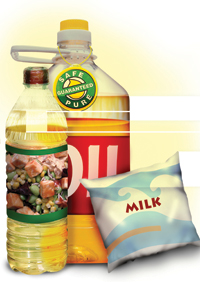 Bakeman's folded up because it raised price of its biscuits by Re 1. We don't want to commit suicide," says Shekhar Agarwal, director, Surya Foods and Agro, the maker of Priya Gold biscuits. But, he admits, the company is rapidly getting pushed to the edge as its cost of sugar has doubled in the past couple of months and the cost of wheat flour and edible oils have jumped 20 per cent. He cannot get enough butter even though the supplier has raised prices by 25 per cent. "We cannot risk changing the recipe or raise prices," he says.  That is quite a tricky situation to be in for a packaged food company. In a normal year, agri input costs add up to less than half the revenues of  pure packaged food companies, but in an inflation period like this they can shoot up to almost two-thirds. Even the deep-pocketed multinationals, which usually ride out minor inflation gusts, are getting fidgety now.

Gautham Mukkavilli, the head of PepsiCo India's food division, FritoLay, concedes that poor monsoon and its attendant inflation are hurting. "…We are already seeing a few signs (of inflationary pressure) on key raw materials like potato and pulses. We expect a severe impact of this in the coming year," he says. Some smaller vendors are beginning to renege on long-term contracts and are demanding spot market prices, he points out. Consumer demand in such an environment is also a worry. "…The rise in price of essential food items adversely impacts the lower and middle income households that have less money to spend on ‘processed and packaged food items'; it consequently impacts our top-line growth momentum," he says.

PepsiCo India's beverage business is also troubled by the spike in sugar prices and the consequent government curbs on stocking of sugar by large users. "We're feeling the pressure," says a PepsiCo India spokesperson. Rival Coca-Cola is also worried. "We have to buy sugar on long-term contracts (to keep costs predictable) but the unpredictable sugar market and government regulations of sugar are making it harder for us," says its spokesperson.

However, it is only after the September quarter results are out, will one get a fair idea of the kind of financial impact this spate of agri inflation is having on packaged food businesses. Still, a look at Britannia's financials for FY2007, the year of the last food inflation spike, reveals a lot. During that year, the company's material cost jumped 39 per cent and its profit before financial charges — interest, depreciation and tax — dropped 36 per cent. Sure, inflation puffed up its topline also by 28 per cent.

FMCG analyst Anand Shah, of Angel Broking, expects Britannia to get buffetted again. "Sugar being a critical raw material for the company, it will suffer more among the pure food plays than the milk-dependent companies such as Nestle and GSK Consumer Healthcare since milk inflation has been modest," he says. As sugar prices started inching up in late 2008 itself prior to the present blast-off, Britannia's sugar costs grew 23 per cent in FY2009 though its sugar consumption grew only 5.8 per cent

Unlike a couple of years ago, packaged food companies have a lot less room to offset the raw materials inflation by cutting other expenses and driving up productivity. That option largely got used up after the 2006-07 flush of inflation. Britannia, for example, cut its business expenses by 20 per cent in FY2008 to rescue its PBDIT to 8.9 per cent after it had plummeted to 5.8 per cent in FY2007 from 11.7 per cent in FY2006. In FY 2009, Britannia barely managed to keep that number in high single digits — at 7.2 per cent.

Increasingly, the packaged foods companies are staring at unpleasant decisions. These range from changing recipes to breaching popular price points with the option of skimping on package contents in the middle. The hardest one is to breach the popular price points cultivated at great expense in marketing and past inflation-absorption.

Agarwal of Surya Foods admits that the company is already selling some of its biscuits at a loss to avoid the fate of Bakeman's, which lost its consumers to competitors earlier this decade while attempting to raise prices unilaterally and never recovered. "Competition does not allow raising prices. So, we're reducing weight as that is the only way out," he says. However, doing even that is not easy or quick. "It takes three months to change moulds and packaging sizes," he says.


MTR Foods, the company that makes popular ready-to-eat traditional Indian meals, is ready to raise prices but by less than the levels of increase in the wholesale rates of food commodities. The company CEO, Sanjay Sharma, says, "Higher prices may impact our demand… However, any price changes will always be based on value-for-money platform."

Pinakiranjan Mishra, partner, Ernst & Young, sees no way out for packaged food companies but to raise prices together if they want to avoid a collective harakiri. An additional measure, he points out, is to reduce expensive inputs such as sugar by 3-5 per cent as that small a reduction may not be discernible in taste. "Any significant alteration in recipe would change taste and the consumers would reject the product," he says. However, even for a company that has fundamentally changed one of its key raw material successfully, FritoLay is finding the going tough. Mukkavilli points out that price of rice bran oil that FritoLay has swtiched to from sunflower oil over the past couple of years is sensitive to the price of alternative edible oils such as mustard and groundnut oils. "If the prices of other oils go up, so will that of rice bran oil," he says.

There is a consensus in the industry now that the current food commodity inflation is not just another summer storm. Though the 40-50 per cent average inflation of the past couple of months may not stay, everybody expects the raw material prices to hold up at 20-25 per cent above the early 2009 rates at least till the next monsoon season.

Some companies have started taking strategic steps to alleviate the vagaries of food commodities volatility. For example, FritoLay has started working on potato crop irrigation and storage. "Kharif [crop grown in summer] is always volatile because of fluctuating monsoons, so we're trying to make it less volatile by providing drip irrigation back up to our farmers," says Mukkavilli. FritoLay sources about 40 per cent of its potato requirement from contract farming. On the other hand, Rabi, the winter crop, tends to produce potatoes in plenty but some of it goes bad for lack of proper storage. Frito is getting a vendor to set up a 10,000-tonne potato storage facility in Kolkata that will extend the Rabi potato supply from July to at least October.

However, smaller fries such as Surya Foods lack the wherewithal to do similar things. "Given the volatility in the food raw material prices, it is too risky for smaller companies to contract or stock for more than a couple of weeks," says Agarwal. Also, there is a cost to stocking, he adds. The only relief the small biscuit producers can get from the government is in VAT and they have pleaded for a reduction in the average 12.5 per cent VAT.

The grain of each packaged food company is going to be tested over the next year. The conundrum involving protecting profits without risking sales, and reworking products and package contents without repelling customers is going to be tough to resolve. Still, some are hoping that a late burst of rains just might boost crops and consumer confidence, and mitigate the inflation injuries.

Corrigendum
Pinakiranjan Mishra was referred to as a partner with PricewaterhouseCoopers. He is in fact a partner with Ernst & Young (the last bit got missed out in the mail)