Lend Them Your Ears 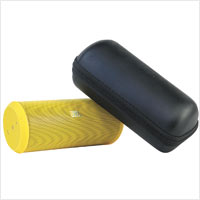 08 November, 2014
Print this article Font size -16+
JBL'S FLIP II SPEAKER
RS 7,990
JBL, a line from US-based Harman International, has brought out another Bluetooth portable speaker in its favourite shape. Like the Pulse, which displays colourful lights while playing, the Flip II — a sequel to the original Flip — doesn’t light up, but it is surprisingly loud for its size. I got a sport yellow cylinder to review, but it comes in black, white, red and blue as well. It feels rugged, solid and well-built, without being heavy. At first glance, I immediately thought it would make a great gift for a teenager, especially given its loudness.

The Flip II’s design is minimalist while making use of colour as a style element. It can sit on a surface any way you like — up straight, or on its side. The top and bottom plus a ridge down the centre are rubbery in a somewhat classy way. On top, you have a power touch button surrounded by two volume, a Bluetooth and phone button. One touch of the Bluetooth button connects you to the device of your choice. The Phone button lets you take calls using the speaker’s microphone; and you can also use the button to end a call. On a call, I was told I sounded clear enough except with a bit more bass.

As far as the bass is concerned, it makes its presence felt as with any JBL audio device, but to my surprise there isn’t a wide range of sounds and the high frequencies don't stand out in particular either. Overall, loud and bass-y is just what a youngster may want. The Flip II has around five hours of battery life. At Rs 7,990, it has a lot of competition from other JBL models as well as other brands — such as Bose, Beats, Ultimate Ears and Soen Audio — that are a bit more expensive but also have more audial finesse.

SOEN AUDIO'S TRANSIT SPEAKER
Rs 12,990
You wouldn’t buy speakers for their design, but with Soen Audio’s Transit Bluetooth speaker — you just may. You can get a glimpse of its unique design from the packaging onwards — it’s classy. There's an Apple-like finish and attention to detail, and you won’t want to throw this box away, which comes with a charging cable, a 3.5’m  connector, adaptor and a beautiful magnetic cover — under which lies the Transit.

The wireless speaker is a single unit and can be used with any device that has either Bluetooth or a 3.5mm jack — that means everything. As the name implies, it is ideal to put into a backpack or big bag, but it is probably a bit heavy to slip into a woman’s handbag, though. One of the most enjoyable ways to use it is to take it around the house, such as when you go into the kitchen to make a cuppa.

To get to that remarkable design — the Transit is a neat rectangle, has rubbery matte finish, with a metallic strip down the centre which goes right through to the back of the speaker. That's where you can press a portion of it to pop out a kickstand. This is particularly well-executed. The device’s build quality is also great.

And now, the most important part — sound. You can tell it’s going to be good the moment you put the power button on and hear the notes that indicate you’re powered on. Connect to a source via Bluetooth or the jack and you get a clear, clean sound, which is surprising given its small size. The bass isn't thumping and booming — just balanced and full. The sound range is more sophisticated and wider than you would get on small speakers. The Transit costs Rs 12,990 and competes with speakers from Bose, JBL, etc. It is available on love4apple.com, Amazon and several other online stores.

THE SENNHEISER CX 275S IN-EAR EARPHONES
Rs 2,990
The Sennheiser CX 275S in-ear earphones don’t look anything special at all. You would think they should, because they’re from one of the most high-end audio brands in the world. But no, this barebones pair of earphones is completely unassuming — no colour, no design elements... nothing. They look like the usual black earplugs; you could dismiss them as being your everyday ear plugs; that is, until you put them into your ears and switch on the music. The rich and full sound made my eyes widen in surprise. The bass was perfect and the higher frequencies very nice. In fact, I’d venture to say the Sennheiser CX 275s is about the best sound I’ve heard on earphones that small.

The earphone set is supposed to cut external noise and, to some extent, it does, but when you hear such quality music, you’re not likely to notice noise anyway. It’s very comfortable to wear, but you’ll need to the care of them, ensuring that one good accidental tug doesn’t snap them. A single control on the wire gives you ON or OFF and control over tracks. And there’s a microphone so you can interrupt the music for a call. Testing this out, I was told, much to my amusement, by many friends that I sounded clear for the first time. At Rs 2,990, it may seem expensive, but it is a steal given its incredible sound and clarity. It works with any smartphone or device that has a 3.5 mm jack, is OS agnostic, but not Bluetooth-enabled. It comes in a little cloth pouch, with an extra set of caps for the ear buds.