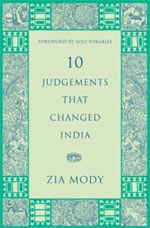 08 November, 2014
Print this article Font size -16+
Lawyers are liars who are so heartless as to defend the worst criminals and corporates, while courts exists to only make you endlessly wait for justice, goes the common lament. And yet, some, nay most, of the basic liberties we enjoy as citizens are only because the Indian judiciary intervened to protect the Constitution from abuse with the common man in mind.

Take for instance, Swami Keshavananda Bharathi, a seer in Kerala, who ran the risk of losing the math’s property as a result of the land reforms of the 60’s, culminating in Indira Gandhi’s 24th and 25th amendment to the constitution which, in effect, gave the government the right to amend everything in the constitution, and took away the Court’s right to strike it down as unconstitutional. The best legal luminaries of the day argued the case over six months to help thirteen judges of the Supreme Court deliver what is arguably the most monumental decision in the Court’s history. While it upheld Parliament’s right to amend any part of the constitution, it also laid down that this power could not be used to alter or destroy the ‘basic structure’ of the Constitution.

In a new book, ‘Ten Judgements that Changed India’, Zia Mody, co-founder of AZB & Partners and arguably one of the top lawyers of the country today, describes this and nine other of the apex court’s most path breaking judgements. There is the Maneka Gandhi case, where the Court reinterpreted Article 21, the fundamental right to life and personal liberty to say that no person shall be deprived of it except according to procedure established by a valid law, meaning arbitrary laws would be considered as no law. In other chapters, she delves into the Shah Banu case, which addressed the conflict between civil laws and religious laws, Olga Tellis, which prevented the forcible eviction of Mumbai’s pavement dwellers, Judicial appointments, Reservations in the Indira Sawhney case, Custodial deaths, Sexual harassment at the workplace and Euthanasia

In each case, Mody begins with the legal principle that was established, goes on to explain the details of the case as well as, and more importantly, the social conditions that formed the backdrop to the case, an analysis of the merits of the case, and the change it brought about subsequently, without sounding dull or tedious. The book has that indelible and irritating mark of a lawyers work, an overkill of citations, many unnecessary. But if you can keep yourself from being distracted by pointers to footnotes in every other line, it is a simple but essential read for those who give some thought to how we came to enjoy many of those democratic liberties we today take for granted every day.