Leaders To Watch Out For 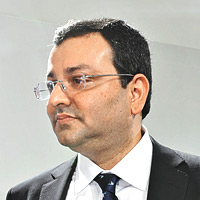 His father's once high-flying aviation business might be going down in flames, but the family's mainstay liquor business continues to be profitable and remains the market leader. Siddharth, 24, is flamboyant and a true chip of the old block. From appearances at high profile social events to his much publicised runs at various marathons, Siddharth is rarely out of the news. However, as his father Vijay Mallya mounts a battle to turn around the airline business, Siddharth is likely to play a more decisive role in shaping what he will inherit eventually.

Rishad appears to be the heir who will eventually run the soaps-to-software major, Wipro. His brother Tariq looks after the family's investment arm PremjiInvest. Rishad, 34, who joined Wipro in 2007, was recently elevated as chief strategy officer. A Harvard Business School and London School of Economics alumnus, Rishad had stints with Bain and Co and GE Capital before he joined the family business. After joining Wipro, he worked across departments and capacities. Along with CEO T.K. Kurien, Rishad's stamp is increasingly seen in the new-found aggression at Wipro.

Murtaza Khorakiwala, 39, took over as managing director in April 2009, when Wockhardt was going through its worst phase, with a debt of more than Rs 3,000 crore. Some lenders wanted the company to be wound up and had initiated litigation. Wockhardt survived and went through a corporate debt restructuring (CDR) exercise. Murtaza, who graduated from the GS Medical College and KEM hospital, Mumbai and did an MBA from the University of Illinois in the US, headed the biotechnology and active pharmaceutical ingredients (API) business. He was head of the strategic business unit at Wallis Laboratories UK, Wockhardt's first transnational acquisition.

Pirojsha Godrej, 30, the only son of Parmeshwar and Adi Godrej, is all set to take up the reins of Godrej Properties (GPL), the real estate company of the $3.4-billion Godrej Group in April. Pirojsha joined GPL as a trainee in 2004 and became executive director in 2008. He holds a bachelor of science in economics from the Wharton School, University of Pennsylvania, US and a masters in international affairs from the Columbia University, US. With the group's 2,000-acre estate in Vikhroli, Mumbai being developed now, rapid growth is on the cards.

Vinita Gupta, 42, the eldest daughter of Lupin chairman Dr D.B. Gupta, had a mission to accomplish when she was given the responsibility of spearheading the pharma major's advanced markets foray seven years ago. Today, Lupin is among the top 10 generic companies in the US with revenues of more than half a billion dollars. A graduate in pharmacy from the University of Mumbai and an MBA from JL Kellogg Graduate School of Management, US, Vinita is now group president and chief executive of Lupin's US business.

She has seen her dad's business grow from scratch to become a $2.5-billion retail giant in 15 years. Ashni Biyani, daughter of Kishore Biyani, founder of Pantaloon Retail, weaves consumer stories out of value retailing. Ashni learnt from her father about connecting to the Indian mindset and the consumer's romance with old things. She has employed mythologists and anthropologists to design brands in the store — which were later cleverly woven into the ad campaigns. In the years ahead, she has to connect with shoppers of her generation who are not attached to the past.

Siddhartha Lal, 37, took his first step towards success in 2000 when he asked for a two-year time frame to turn around Royal Enfield. He proved his business acumen — selling-off the tractor business, quitting the leather, garments and consultancy businesses and inking a joint venture with Sweden's Volvo. In the process, Eicher Motors ceded half the control over the commercial vehicles business. For Siddhartha, it was about focussed growth and a bigger play in a smaller playground. Siddhartha has a masters degree in automotive engineering from the University of Leeds, UK, and is a Cranfield University, UK, qualified mechanical engineer.