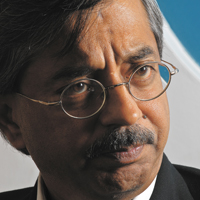 You would expect the head of India’s largest business process outsourcing (BPO) firm — which has $431 million in cash and liquid assets, no serious domestic rivals, and a net income margin of 11.4 per cent — to be doing nothing more stressful than planning a session of golf or the next holiday destination. But Pramod Bhasin, president and CEO of the $1,120-million third party BPO outfit Genpact, is a bundle of nervous energy as he fidgets with his iPhone (he hates it, he says), his BlackBerry and arranges and rearranges a sheaf of paper on his desktop.