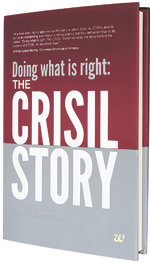 08 November, 2014
Print this article Font size -16+
This brief book cele­brates the 25th anniversary of the founding of Cri­sil, which rates firms, does research on them and on industries, and gives advice based on its work. It is rather taken with Crisil, and does not go into its roots. In the 1950s, the International Bank for Reconstruction and Development, as the World Bank was then known, was a major financier of the Indian government. It also wanted to finance private enterprise, but the government was stuck in socialism, and was not keen on it. So it looked for the most distinguished Indian it could find, and settled on Sir Ramasamy Mudaliar, who served on Churchill’s war cabinet. After World War II, he went in the Indian delegation to San Francisco to found the UN, and became the first chairman of the Economic and Social Council. The World Health Organization was created on his initiative. Soon, he returned to India; then the Maharaja of Mysore made him Diwan of his kingdom. On Mysore’s accession to In­dia, Sir Ramasamy retired to Madras. In 1955, he agreed to be chairman of Indust­rial Credit and Investment Corporation of India, whi­­ch the World Bank set up to fund private industry. He stayed with ICICI for three years; he was succeeded by Gagan-vihari Lallubhai Mehta, who in turn was succee­ded by Hasmukhbhai Thakurdas Parekh, uncle of Deepak Parekh.

ICICI was in the business of investing in and lending to businesses. To lend wisely, a lender needs information about the financial status of the borrower, which was scarce. So it set up a department to assess the creditworthiness of borrowers. It was hived off in 1987 into Crisil, which also began selling the information to other interested parties.

This book can be easily accommodated in a purse. It is just 40,000 words in comfortable type; it could be read over a weekend. It mostly consists of stories; it has eight pages of photographs. Al­­­tho­ugh they are in co­lo­ur, their themes are pre­di­c­table: photographs of important people releasing books, people in nice clothes shaking hands, and executives smiling fixedly; the only unconventional picture is of Crisil’s Chinese employees — young, informal, amused and amusing.

The text is full of names that must mean much to insiders, but will often be unfamiliar to outsiders. The stories are also ones that insiders tell to great mutual entertainment but fall flat among outsiders. The authors have tried to create a book that is fun. But they have been rather neglectful of the broader readership.

Credit rating is a difficult business. A credit rater faces the challenge of earning a living by charging firms that it rates and trying at the same time to be as stern and objective. Crisil has generally done it well — at any rate, it has not had any faux pas — but the sailing cannot have been smooth all the time. The book gives some stories of things going wrong. For example, Crisil tried to rate hospitals and clinics, but those who managed them were quite offended. They wanted to be told that they were the best in the world; when their expectations were not met, they refused to cooperate. There should have been more such sto­ries. The book should have explained more vividly what exactly the business is about, and what makes Crisil good at it.

The reviewer is consulting editor of BW |Businessworld