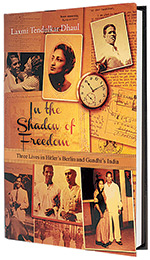 08 November, 2014
Print this article Font size -16+
Changing socioeconomic and cultural environments have myriad consequences on the lives of people. In some, they ignite passion to carve out a new path for themselves and the society at large. Ayi Ganpath Tendulkar was one such Indian. His life was shaped by the prevailing political milieu that drew him to the shores of Germany and his inscrutable involvement with German filmmaker Thea von Harbou who was 16 years elder to him.

Somewhat similar conditions in Germany and India forged a bond of mutual respect and trust between Tendulkar and Von Harbou. Her sensitivity towards Jews and Indians was commendable despite being looked with suspicion due to her not so clear political links with the Nazis. Tendulkar was a man of high intellect with a strong desire to make India an “Industrial India”. He could relate to the India’s political situation due to his affinity towards the Indian National Congress, which had sponsored his education at the Berlin University. Adding another dimension to the already complex situation was his controversial marriage to Indumati Gunaji.
All these minutiae are enlivened by Laxmi Tendulkar Dhaul in In The Shadow of Freedom. Dhaul is the daughter Tendulkar and Indumati. The book is a personal memoir of a daughter whose association with her father was short but intimate. Tendulkar died when Dhaul was 20 years old. Her account, therefore, is informed by anecdotes, diaries and ruminations on her childhood underlined by her parleys with her mother who outlived her husband. The book, therefore, contains private factoids whose access is limited to people few and far between.

The multifaceted account proffers a wealth of insights into an era that laid the foundation of India’s posterity. There is abundance of trivia on several 20th century iconoclasts such as M.K. Gandhi and Adolf Hitler, and how their intervention in the political affairs of their countries altered the lives of their inhabitants. Hitler’s policy of branding  Germans’ marriages to foreigners as illegitimate caused premature estrangement between Von Harbou and Tendulkar, and Gandhi’s opposition to his marriage to Indumati cast a gloom over his connubial bliss. Gandhi had imposed five years of physical separation between the couple as the precondition for giving his assent to their union. He even forbade them from having children since they would be a hindrance in the path of Swaraaj.

In spite of being in a disadvantageous position as a daughter, Dhaul manages to furnish an account that is not coloured by her emotions. She has penned down a portrait that illuminates not only aspects of the freedom struggle but also the relationship between her parents. And it takes a very good writer to successfully negotiate the thin rope of objectivity and remembrance.