Lead Review: Get Up, Stand Up 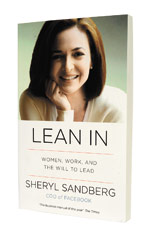 08 November, 2014
Print this article Font size -16+
Does the glass ceiling exist? It does, says Lean In, but it looks at the way out for women, at what each one can do to make their case and thereby avoid career-destroying or stagnating choices. The book, in author Sheryl Sandberg’s own words, “makes the case for leaning in, for being ambitious in any pursuit” and for (working) women, because a movement towards the goal of true equality begins with each woman who leans in.

Sandberg, who is the COO of Facebook, says a truly equal world would be one where women ran half the countries and companies and men ran half the homes. She makes a case for it and gets into a threadbare analysis of why so few women are leaders (just 4 per cent of Fortune 500 CEOs are women and only 17 women are leaders of the 195 independent countries in the world).

Sandberg’s is no fire-and-brimstone tone, though her now-famous TEDTalk on the same subject was viewed over two million times and did elicit some strident reactions. In a world where women actually think of themselves as less deserving than men do of themselves — though both may have similar qu­a­li­fications and qualities — she makes a cogent case for women to be more thoughtful of their careers.
It is fine, she says, if a woman does not want to have a career at work, but if she does, she must not make her decisions too far ahead, particularly those that she does not even know she’s making! Such as wanting to have a child two years from now and falling back on one’s expectations of oneself, not really wanting the next promotion because, in her mind, she is already creating the mental (and professional) space for rearing a child.

There is an ambition gap for leadership among working women, she observes, and suggests that women do what they would do if they were not afraid. Women have the skills to lead in the workplace, but this is continuously ruined by not taking risks and by not advocating for oneself — behavioural traits that girls are culturally discouraged from exhibiting. Besides, women systematically underestimate themselves.

At meetings, women need to sit at the table and participate rather than being spectators. From her experience, Sandberg says, she has been spoken over and discounted while men are not, but it is nevertheless important to take part actively.

Success and likeability are positively correlated for men and negatively for women; here, she appropriately quotes Facebook founder Mark Zuckerberg  as saying that the desire to be liked by everyone will hold you back. Still, “I fear women will continue to sacrifice being liked for being successful,” she predicts. And this in the US corporate world!

Risk-taking, choosing growth, challenging themselves and asking for promotions (with a smile) are all necessary for women (as they are for men, though they generally seem to come on their own to them), Sandberg says. In other words, these are even more necessary for women. And they should not enter the workforce already looking for the exit. Observing that gender-specific expectations are self-fulfilling, Sandberg doles out some practical advice to working women to choose their husbands well. Men who think a woman should be smart, opinionated and ambitious do exist, but search for them, she suggests. She should know —  for she discovered it only after her first marriage broke down.

The Selfish Type!
Columbia Business School professor Frank Flynn and New York University professor Cameron Anderson did a case study of a successful entrepreneur named Heidi Roizen. Half the class got the case study where she was called Heidi, and other half got the same case study with just one difference — Heidi was replaced by Howard. While the students rated Heidi and Howard equally competent, they liked Howard — but not Heidi. While Howard was found appealing, Heidi was seen as selfish and not “the type of person you would want to hire or work for”.

Whether we like it or not, there is a clear difference in how people, both men and women, react to a women and men who are successful. Hats off to Sandberg for acknowledging it and bringing it to the table.

Sandberg’s homely advice about strategies that work for women will be of great use to women who aspire to be leaders.  I would definitely encourage all young women out there to listen to her. As they face the challenges we faced, I would want them to remember the question Sandberg asked in her Barnard College commencement speech where she first exhorted women to “lean in” to their careers: “So please ask yourself: What would I do if I weren’t afraid? And then go do it.”

In fact, one of my first thoughts  after reading this book was that I wish I had read it when I started my career. It would have helped reduce the agonising hours I then spent wondering what I was doing wrong to cause misunderstandings. I would definitely encourage all women who have the ambition to make it big in the corporate world to read it and be more ready to face the hypocrites around us.

The book offers excellent advice on how to go about it, from having the confidence to speak up, to negotiating your salary to asking for a promotion. She offers very commonsense suggestions that will help women professionals. It certainly helped me.