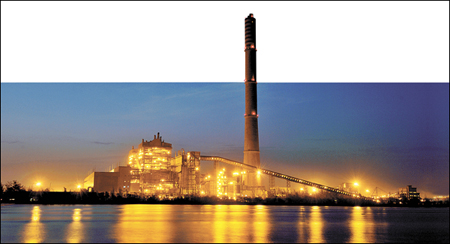 GENERATION
Maxing Out
India’s power generation prowess, best showcased in the terminal year of the 11th Plan when it added 19,459 MW, is blighted by several plants operating at low PLF (plant load factor, a measure of average capacity utilisation). Nine states reported less than 70 per cent PLF (see ‘Wasted Watts’), even as the national average stands at 76 per cent. In the midst of inefficient plants stands one that has maintained a PLF of over 100 per cent for over six years now. The Dahanu thermal power station (TPS), owned and run by Reliance Infra, is a 2x250 MW plant, which commenced operations in 1996. It uses a blend of domestic and imported coal in the ratio of 80:20, and has had a PLF of over 100 per cent since 2006-07. What lies behind this performance?

“Keeping in view the logistics, economics, operations and maintenance challenges and environmental issues, the power station has gone in for blending imported coal with washed Indian coal. It has also undertaken various Six Sigma projects, the results of which were encouraging and beneficial to optimising coal consumption,” says Lalit Jalan, CEO of R-Infra. “Further, the power station has established effective yard management procedures to ensure proper coal stacking and compaction to avoid spillage and to control fire.” The management’s emphasis on the best operation-and-maintenance practices, putting business processes online through SAP and bringing down consumption by auxiliaries such as fans, pumps, blowers and compressors are behind Dahanu plant’s consistent generation record.

Another plant that comes close to matching Dahanu is the Budge Budge TPS owned and operated by CESC in West Bengal. This plant has also achieved a PLF of over 100 per cent, but consistency has been an issue. In what can be read as a good sign, the last financial year saw nine stations performing at a PLF of over 100 per cent. While Dahanu still topped with a PLF of 104.18 per cent, the other thermal power plants that came close were Torangallu (SBU I & II), Simadhari, Singrauli STPS, OP Jindal TPS, GH TPS (Leh Moh), Unchahar TPS and Bhilai TPS.

TRANSMISSION
Private Interest
Transmission has traditionally seen central and state utilities putting up lines, with little or no role for the private sector. Although the Electricity Act, 2003, opened the gates for private players, it took  the introduction of the ultra mega transmission project plan in 2006 for Vedanta-owned Sterlite Technologies to bag the first transmission project in 2009. The project, awarded by the Power Finance Corporation (PFC), involved the building of the East-North Interconnection. Under the plan, projects are awarded by PFC and the Rural Electrification Corporation (REC), the nodal agencies.

Since then the two agencies have awarded four projects each. From REC, Reliance Power Transmission has bagged the 400 KV Talcher-II and 400 KV North Karanpura projects, while a consortium of Patel Engineering, BS Transcomm and Simplex Infrastructures has got the 765 KV Raichur Sholapur line and Power Grid Corporation of India (PGCIL) the 765 KV Vernagiri line. PFC has given Sterlite the 400 KV East-North Interconnection, 765 kV Jabalpur and 765 KV Bhopal-Dhule projects, and PGCIL the 765 KV Nagapattinam-Madhugiri project. The biggest attraction for private players is the average 15 per cent RoE that they factor into their revenue model; the tab being picked up by generators and distributors. “We need a commensurate transmission network which can handle massive capacity addition targets. Private players have already invested around Rs 10,000 crore into this segment,” says a senior REC official.

Another shining example of private initiative in  transmission is Adani Power’s 1,000-km high voltage direct current line which brings power from its Mundra plant in Gujarat to Mohindergarh in Haryana. This is the longest line put up by a private player and was completed in a record 24 months.

DISTRIBUTION
The Lone Star
A chain is only as strong as its weakest link. this adage never held truer than now in India’s power sector. While the generation segment has been the focus of reforms, many attribute gaps in distribution to the woes of the sector. The most recent consequence of the failure to rein in distribution indiscipline resulted in the grid collapse that left 21 states groping in the dark on 31 July.

However, one state that is a role model in this connection is Gujarat. The state’s power distribution model is praised by the power industry, and states like Andhra Pradesh are planning to emulate it.

What is Gujarat doing differently? “The Gujarat Urja Vikas Nigam (GUVN) acts as a holding company and ensures coordination between distribution, generation and transmission,” says K.P. Jangid, general manager of commerce at GUVN. “It also takes care of centralised purchase of power and sells surplus power to other states.”

Gujarat is power surplus and ensures continuous electricity to its 18,000 villages. This it achieves by having separate feeder lines for agricultural work and rural households under its Jyoti Gram Yojana scheme. There is 100-per cent metering, which enables the government to keep track of the quantum of power being utilised by the two segments and, in effect, cut power theft.

The state is in the process of installing high-voltage distribution transformers catering to small groups of 2-3 agricultural consumers, with the aim of bringing greater efficiency to the system. To attract private distribution companies, Gujarat has allowed them to pass on fuel purchase costs to end-users. “This helps distribution companies recover their money instead of having to dig into their own pockets to pay to generators,” says Jangid.