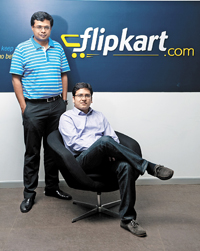 08 November, 2014
Print this article Font size -16+
Offices of Bangalore-based e-tail giant Flipkart were raided by sleuths of the Enforcement Directorate (ED) on November 30 while probing alleged violation of foreign direct investment (FDI) regulations. Important documents and computer hard drives were confiscated to be submitted to the cyber forensic department for further investigation.
While an independent source confirmed the raid, Flipkart responded by saying: “We are cooperating with authorities but (we) do not comment on specifics. We are in complete compliance with the laws of the land.”
While Flipkart is the first to come under the ED scanner, the authorities are believed to be readying raids on other e-tailers who received funding while FDI was banned in multi-brand retail. At least 30 e-tailers, including Snapdeal, Jabong, Yebhi, Myntra and Fashionandyou got funding totalling $800 million in the past few years.
A four-month-long Businessworld investigation (‘E-tail’s FDI Outlaws’) in September had revealed that each foreign-funded e-tailer had created a complex web of companies to skirt the regulations under the eyes of the country’s nodal agency for FDI policy — the Department of Industrial Policy and Promotion (DIPP) — which was busy preparing a series of draft notes recommending opening up of the sector.
In response to a question in the Lok Sabha on November 26, commerce minister Anand Sharma replied, “The Reserve Bank of India said that matters related to... Flipkart Online Services have been referred to the Directorate of Enforcement for further investigation.” Sharma also said, “References alleging that some companies are carrying out activities in violation of the FDI policy have been received and the ED has been directed to investigate.”
In an October 5 letter to BW, commerce ministry undersecretary S. Natarajan had said, “Violation of FDI regulations is covered by the penal provisions of the Foreign Exchange Management Act (Fema), 1999. The Reserve Bank of India administers the Fema regulations and the Directorate of Enforcement under the Ministry of Finance is the authority for enforcement of Fema.” RBI emailed a response on November 22 saying, “Since the matter is sub judice, we are not commenting on the issue.”
Meanwhile, since September, Flipkart has frantically changed its management and company holding structures. Bal Krishna Bansal — a dormant director in WS Retail and a paternal uncle of founder Sachin Bansal, resigned from the board on September 6. Two directors were added on September 18: Sujeet Kumar, president of operations at flipkart.com, and Rajiv Kuchhal, founding member of Infosys BPO and ex-COO of OnMobile.
However, what happened to Flipkart Online continues to remain a mystery. BW reported earlier that the Flipkart Online tag was replaced overnight at several places with Flipkart India. Employees were told it was a change of name, but the two entities continue to exist. It is Flipkart India that currently holds the licence for flipkart.com, according to CFO Karandeep Singh. For Flipkart, this appears to be a race against time — and the law of the land.