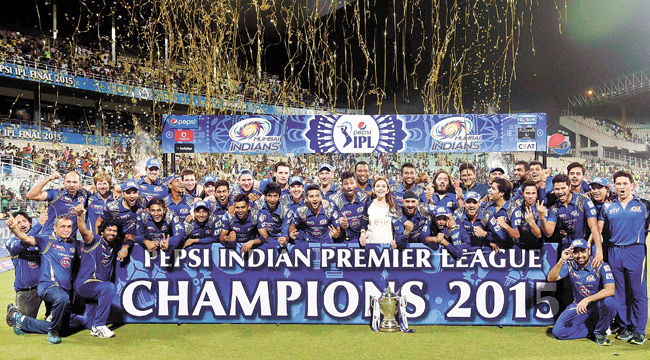 10 June, 2015
Print this article Font size -16+
The Indian Premier League (IPL) season 8, held from 8 April to 24 May, predictably had a slow start with critics citing cricket fatigue after the just-concluded World Cup 2015. It appeared as if IPL-8 was the underdog pitched against the stronger ICC World Cup. But IPL-8 proved the naysayers wrong once again.

By May-end, the official broadcaster, Multi Screen Media (MSM) claimed ad revenue of over Rs 900 crore, a 20 per cent rise over the last season. IPL also emerged as the most bankable annual sports property for Indian advertisers. The ICC World Cup, whose broadcasting rights are held by Star Sports, is also a strong sport event but it is held once in four years. “We made good money right from the first game. The fixed inventory was a complete sellout to 12 sponsors two months before the tournament,” said MSM president Rohit Gupta.

Marketing experts, supporting IPL, believe the event is ‘cricketainment’ at its best and it works better than the World Cup for advertisers because of its wider reach across all segments of both urban and rural consumers and across gender and age. “IPL is more a local level event, and the emotion of a consumer is harvested in a span of 45 days consistently. The World Cup is only a six-India-match tournament, where advertisers will buy media rights as and till India progresses in the tournament,” says Harish Bijoor, CEO of Harish Bijoor Consults. He adds that consumer’s attention either wanes or goes up as and when India progresses or fails in the tournament, whereas during IPL, there are no negative sentiments.

Cricket-crazy India is the biggest market for the sport. At the World Cup, apart from India matches which were mostly on weekends, the tournament had a cumulative reach of 635 million till the semifinals stage. Whereas 60 matches of IPL 8 were viewed by 192 million viewers. Some analysts feel that India’s good run at the World Cup helped IPL’s popularity.

Star India had about 6,000 seconds to sell to advertisers in each of the World Cup matches this year. According to AdEx, which provides an estimate of the total value of advertising on television and in print and radio, Star sold an average of 4,500 seconds per India match. In the 40 non-India matches, it sold close to 2,600 seconds per match. According to industry sources, Star charged an average rate of around Rs 5 lakh per 10 seconds for India matches and Rs 1.5-1.75 lakh per 10 seconds for non-India matches. Star Sports had set a target of Rs 850 crore through ad revenue for the ICC World Cup tournament that ended on 29 March this year. While Star sources said they had come close to the target, some sports watchers claimed that the network had fallen short by 20-25 per cent. “IPL has been fantastic this year, we pre-sold the inventory at Rs 4.90 lakh per 10 seconds,” says Basabdutta Chowdhury, chief executive officer, Platinum Media at Madison Communications.

Big On Brands
The eighth edition of IPL saw big brands coming on board in large numbers for the first time. That included e-commerce players as well. MSM signed up 12 sponsors, including PepsiCo, Vodafone, Hero MotoCorp, Paytm, Intex Mobiles, Amazon.in, Cardekho.com, Magicbricks.com, Vimal Pan Masala, Raymond, Cadbury and Parle Products. Presenting sponsors Vodafone and Amazon paid Rs 60-70 crore for their association with IPL, while associate sponsors such as Cardekho and Paytm paid Rs 35-40 crore. Pepsi, which continues to be the title sponsor, had struck a deal for Rs 400-450 crore for five years. For the World Cup, the presenting sponsors paid Rs 60 crore each to Star India, the official broadcaster; the associate sponsors paid anywhere between Rs 10-40 crore each, according to a statement from Star.

“A brand ought to be present where its target audiences are. Moreover, a mass brand just cannot afford not to be involved with cricket, as it attracts personalities from every sphere of life, from Bollywood celebrities to industrialists. Thus, cricket works best and gives high returns to advertisers,” says Prathap Suthan, chief creative officer at ad agency BangInTheMiddle.

Compared to the bluster of MSM’s official position, the data, however, shows that the growth over IPL 7 was only marginal in terms of advertising volumes and number of advertisers. Advertising volumes for IPL 8 saw an increase of just 0.3 per cent compared to IPL 7 (from match 1 to 60 of both the seasons), according to TAM Media Research.

The top three categories — Internet services of B2C and online shopping (28 per cent), cellular phone services (10 per cent), and smartphones (9 per cent) — together accounted for almost half of the ad volumes during the commercial breaks in IPL 8, followed by auto and FMCG companies. The new e-commerce players, as the fastest growing segment, were the driving force for IPL 8 too.

The advertising community sees the event as a highly saleable short-term window since it has emerged as a platform that provides maximum visibility in a short, fixed time span of two months. “This is also the time that advertisers are building their brands in a competitive environment, which is why we are seeing a rush to occupy this media space,” says C.V.L. Srinivas, CEO, South Asia, Group M. He added GroupM’s This Year Next Year (TYNY) reports of 2014 and 2015 had predicted that e-commerce would be the fastest growing, and the peaking spends show just that. Vodafone, meanwhile, remained a big advertiser for eight IPL seasons.

Favourite Sport
Ultimately, it was not a World Cup versus IPL , but a victory for cricket as an advertising platform. Paytm, for instance, was seen in a big way on both platforms. “Our customer base has a youth bias, and thus, cricket fits in perfectly with our core target group. There is a strong focus on driving consumer engagement through the non-stop access the brand enjoyed for 40-45 days during IPL. We had earlier also taken up the Super 4 property across all World Cup matches on Star, and it paid us rich dividends,” says Sonia Dhawan, marketing head, Paytm.

Both Star and Sony did their best to expand reach this year. While Star India chose to broadcast the matches across all regional languages for the first time, IPL too tried out an experiment — it organised Fan Parks to screen matches in those cities where IPL is not played. The move, MSM claims, was successful, with 10,000-20,000 spectators thronging these parks for every IPL game.

The new marketing tactics gave handsome returns. IPL 8, for the first 54 matches, saw 23 per cent higher television ratings than the same period last year, according to TAM Media. The average rating for the tournament after the first 54 games stood at 3.6 compared with 2.9 for the corresponding games of IPL 7. The time spent by viewers per match was 45 minutes and 43 seconds, up 9 per cent from IPL 7. “IPL has been able to cultivate a dedicated viewership, much like the Barclays Premier League. Its viewership has grown wider and deeper, even reaching earlier disinterested segments like women in small cities. For the advertisers it’s an important time in their calendar year,” says Gupta.