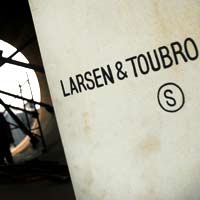 08 November, 2014
Print this article Font size -16+
Shares in Larsen & Toubro Ltd fell as much as 3.5 per cent after the Economic Times newspaper reported India's biggest engineering firm, was going to trim its Rs 1700 crore (Rs 1.7 trillion) order book by about 10 per cent, without specifying how it got to the estimates.

"We have five projects where we feel that the developers have not been able to resolve issues with the government. We feel it is prudent to remove these orders from the order book since things have not moved for two years or more," L&T's director and the head of construction and infrastructure unit, SN Subrahmanyan, told the paper.

A company spokesman declined to comment on the size of any potential write-off, but said L&T periodically assesses the health of its order book.