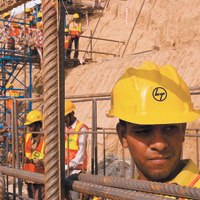 08 November, 2014
Print this article Font size -16+
Larsen & Toubro, India's top construction and engineering company, beat estimates on Monday with a 15 per cent rise in September quarter net profit as it completed more projects, and said new orders rose 30 per cent from a year ago.

The Mumbai-based company said recurring net profit rose to Rs 915 crore during the second quarter of the fiscal year from Rs 798 crore a year earlier.

The company also reported one-time gains on account of a stake sale in a subsidiary and reversal of provision in relation to the stake it earlier held in Mahindra Satyam. Including the one-time gains, L&T's net profit was Rs 1,137 crore.

The market had forecast a net profit of Rs 876 crore, according to Thomson Reuters I/B/E/S.

Larsen's order book, which is an indication of its outlook, stood at Rs 1.58 trillion at the end of September. L&T said it won new orders worth Rs 20,967 crore in July-September, up 30 per cent from year ago.

The company forecast in May a 15-20 per cent growth both in revenue and orders during the current fiscal year ending March 2013.

India's economic growth languished at 5.5 per cent in the quarter to June, near its slowest in three years, as a sense of policy inertia stifled corporate sentiment, curbed capital expenditures and delayed big-ticket projects.

The country's industrial output fell 0.2 per cent in July and rose 2.7 per cent in August.

Larsen is focusing on ramping up overseas growth, particularly in the Middle East, Brazil and Turkey, looking to offset the slowdown at home and aiming for foreign markets to account for 25 per cent of revenue by 2016.

Shares in the company, valued by the market at $18.7 billion, were trading 2.2 per cent higher after the results, while the BSE Sensex was up 0.5 per cent.