Larsen And Toubro Eyeing Defence Orders Worth Up To $1.4 Billion 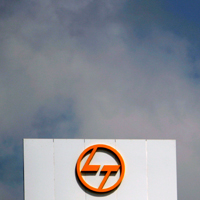 08 November, 2014
Print this article Font size -16+
Larsen & Toubro Ltd is competing for defence contracts worth up to 80 billion rupees that will be awarded in the next few months, M. V. Kotwal, president of the company's heavy engineering department, said on 17 June' 2013.
It has bid for four contracts from the Indian coast guard to supply training ships and support vehicles, worth about 40 billion rupees in total. The orders are likely to be finalised in the next six months, Kotwal said.
Larsen & Toubro, India's largest engineering and construction company, also plans to bid for two landing platform docks, worth 10 billion to 20 billion rupees each, to be awarded by the Indian government.
The government is planning to offer contracts to build four multipurpose landing platform docks, two of which will be given to private-sector firms. A request for proposals for the docks will be finalised in the next few months, Kotwal said.
To foster the growth of Indian defence companies, the government has rolled out a new procurement programme seen as favouring domestic firms in a field that has been dominated by state companies and foreign firms, and is looking to partially remove restrictions on foreign companies investing in Indian defence-sector firms.
"In the next two years, we can see a clear swing in defence orders given to Indian companies," Kotwal told reporters.
Larsen & Toubro has already won a coast guard contract worth more than 16 billion rupees to supply 54 speed boats, at a cost of 300 million to 340 million rupees each.