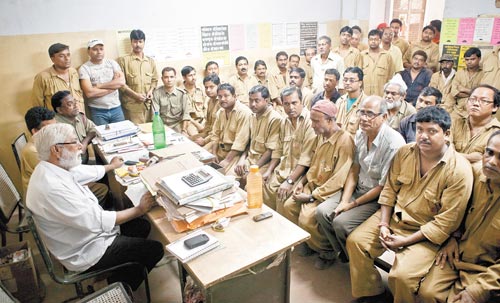 Says Sen: "Before the May elections, Left unions undermined the law. They were reaching bipartite settlements with companies that provided less than what was mandatory under law. After dragging negotiations over 4-5 sittings, they would take a packet and settle. Workers' conditions continued to deteriorate." To counter these practices, her union has been insisting on tripartite settlements with government functionaries as the third oversight party.

How strong are the Trinamool unions? Sen does not have any authentic figures, but claims she is receiving 3,000 calls for affiliation per day. She also says she was receiving delegations of workers "till 11 pm every night". The registrar of trade unions, Mohammed Nasim, acknowledges that most of the current new registrations are of the Trinamool unions.

"The most deprived sections are shifting to the Trinamool," says Subal Biswas, West Bengal's additional labour commissioner. According to Kamal Tewary, president of the independent Shramik Sangram Committee (SSC), who leads the permanent workers' union in Garden Reach Shipyards, "casual workers affiliated to Citu in the shipyard would be denied their gate passes the next day if they failed to turn up for some party rally the previous day." These workers, who were "treated like chattel were the first to leave the Citu", he says.

Anuradha Talwar, organiser of the independent New Trade Union Initiative (NTUI), charges CPI(M) leaders such as Lakhan Seth, former MP from Haldia and chairman of the town's development authority, with catalysing the exodus. "Seth rose to become part of the industrial mafia. He was a trade union leader and contract supplier of labour rolled in one. After the Left Front debacle, workers in Haldia quit the Left union in droves," she says.

All this is hotly denied by Ghose. He says Seth was a social activist who built "hospitals, educational institutions and dental colleges". Citu was, in fact, says Ghosh, at the receiving end for the past few months. Trinamool affiliates had let loose a reign of terror on Citu offices and functionaries after the polls in May to capture their unions and members. In a dossier, Ghose claims four Citu activists and 20 Left party men had been killed since May 2011. The dossier also details district-wise lists of Citu offices destroyed or captured by "Trinamool goons". Ghose says "the target of attacks are workers of unorganised unions, mainly from the transport sector". He claims the unions in the older and more established firms such as Durgapur Steel and other PSUs continued to back Citu and allies. Tewary corroborates this. He says the older, permanent-worker unions had not yet shifted allegiance.

Sen, though, insists her union is also making a bid for the bigger, established units, and cites the example of BSNL and the West Bengal State Electricity Board where INTTUC formed unions recently. "Just watch, we will be the majority in these units by next February," she says.

A Proactive Government
Meanwhile, the state government has adopted an aggressive labour policy promoting industry-wide settlements, encouraging dispute resolution through tripartite settlements and trying to reverse lockouts and work stoppages. Some of the recent big industry settlements have been for 278 tea gardens spread over the Terai and Dooars region, benefitting 250,000 daily-rated workers. The agreement signed on 4 November among 37 trade unions, five planters' organisations and the government provides for a rise in daily wages to Rs 85 per day from Rs 67. The three-year pact, effective 1 April this year, also steps up daily wages to Rs 90 and Rs 95 in the second and third years, respectively.

Biswas, who brokered the deal, is forthright in his criticism of the previous Left Front dispensation. "Bipartite agreement between some of the central unions and the managements were often legally questionable." Giving the example of the jute industry settlement between central unions and the Indian Jute Mills Association in February 2010 in which after a 61-day strike a heavy production target of 30 tonne per day per worker was enforced. This was not achievable and had led to further strikes.

"Central unions agreed to gratuity payments in installments. They also let retired workers be re-employed at Rs 110 a day after signing an agreement for a minimum wage of Rs 157 per day. These were breach of law," says Biswas. "So, we encourage tripartite settlements so that mandatory labour provisions are not violated."

It is a signal that Mamata sent out when she nominated Purnendu Bose as labour minister. An old trade unionist, Bose joined TMC as late as in 2006 during the Singur imbroglio. Seen as a militant with ‘Naxalite' leanings earlier in the decade, he was a union leader at Kanoria Jute Mills in Howrah, which has been the centre of lockout battles for the past six years. TMC's message is clear: the government represents the workers and it can solve their problems.

Bose lost no time to prove he can deliver. Despite factionalism within his old union and opposition by his erstwhile comrades, he hammered out a settlement for Kanoria Jute, and the locked-out mill has restarted with one shift and the first batch of 480 workers. "Our government restarted four closed jute mills, and negotiations are going on for two others," says Sen.

Incidentally, West Bengal is, perhaps, the only state that pays a ‘lockout dole' of Rs 1,500 per month to workers who sit it out without wages. There are around 25,000 workers today on lockout dole in the state, says Nasim.

break-page-break
Is the perception changing about West Bengal amongst investors? Confederation of Indian Industry (CII) director general Chandrajit Banerjee says industry perception has turned positive after seeing Mamata's proactive steps to improve the industrial climate. "West Bengal offers huge opportunity, especially for those looking for human capital. Things are moving on the IT and manufacturing front as well as for affordable healthcare and training centres," says Chandrajit. Sen, too, is convinced that money is moving in. "JSW Group is investing in a big way. So is Changi Airport," she says. "We welcome the Tatas too," she adds after a pause.

The Independents
Interestingly, there is a third force emerging, which is cynical about the political intent of the various party-affiliated unions of the Left and the Right. It has gained some traction in the past months. A strong player among the independents is Tewary's SSC. In recent months, it has garnered a membership of around 25,000 with control over the workforce at Garden Reach Shipyards, Paharpur Cooling Towers and the Kolkata Hindustan Unilever unit.

Similarly, Talwar, who lives with her comrades in a ‘commune' of 11 acres in Maheshwarpur, has built up the farm workers union, Paschim Banga Khet Mazdoor Samiti, with nearly 50,000 members to ensure that the legal minimum wages and hours of work are implemented. "Ours is a three-way battle. Where there is breach of law, we go in for a militant fight. Where employers honour laws, we coax workers to give proper production and ensure the health of the unit. Finally, we encourage workers' initiative in leadership, unlike the top-down system of old unions," says Tewary.

The influence of the militant Adivasi-backed Progressive Tea Workers Union (PTWU) could be observed in the recent tea industry settlement. Interestingly, a slew of central unions were signatories to it, but the militant PTWU played a clinching role. With over 60 per cent of workers in the tea gardens being Adivasis, the Akhil Bharatiya Adivasi Vikas Parishad had called on its members to quit the central unions and promote the more aggressive PTWU.

"The Adivasi union played a crucial role. Bonus negotiations that normally drag on for weeks was settled this year in a day. The central unions had discredited themselves. The last agreement in 2008, they managed a bare Rs 2 rise in daily wages and that too after a 15-day strike," says Talwar, who is also a Supreme Court-appointed advisor for implementation of ‘Right to Food' programme in West Bengal.

Trade union leaders say the "independent" streak was evident among jute workers, who often defied the central trade union leadership and their calls of action. As far back as in 2001, when the central unions called off their strike in jute mills, the leaderless workers continued the strike action for another 11 days. Their grouse: the agreement inked through CPI(M) labour minister Mohammad Amin was a "sell-out".

Tough Call For Mamata
The wheel has turned full circle. The government plans to amend labour laws to prevent strikes and disruption of production. Ironically, at an all-party meeting, Citu and other Left unions opposed such amendments. Ghose, instead, promised a massive campaign against the government on illegal practices in respect of contract labour — which he claims makes up 60 per cent of West Bengal's labour force.

Far more serious is the situation in the state-owned Kolkata transport sector, where tram workers and bus employees have not been paid their wages by the bankrupt transport undertakings for over six months. "We have kept quiet till now. But I cannot guarantee that the workers will remain peaceful anymore, if they are not paid," Citu's Ghose thunders.

The restiveness under the surface is palpable. Citu and the Left is waiting for a chance to step in to corner the TMC government. On the sidelines are the independents who are convincing disenchanted transport workers to dunk the Citu unions and go on the warpath. The road ahead for Mamata is indeed a rough one.