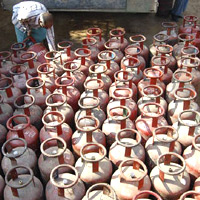 Petrol and diesel prices too may go up marginally as the oil ministry considers raising dealers commission by at least 23 paisa and 10 paisa a litre respectively.

The 44 per cent or Rs 11.42 per cylinder increase in the commission on the subsidised cooking fuel is being passed on to consumers, they said.

The hike comes within weeks of the government deciding to restrict supply of subsidised cooking gas to 6 cylinders of 14.2-kg size per household in a year. The remaining supplies would have to be sourced at market rates.

The hike being considered for petrol and diesel is less than 67 paisa and 42 paisa respectively being demanded by petrol pump dealers in view of their working capital cost going up substantially due to frequent price changes and sharp rise in overheads like electricity charges.

Currently, petrol pump dealers get Rs 1.49 a litre commission on sale of petrol and Rs 0.91 a litre on diesel.

Pump operators have demanded that this be raised to Rs 2.10 a litre on petrol and Rs 1.33 per litre on diesel reasoning that unlike LPG agencies, petrol pumps open 365 days a year on 24 hours basis thereby incurring higher operating cost.

LPG agencies are closed on national holidays as well as once a week.

Besides, petrol pumps provide free facilities such as toilets, water and air-pressure for tyres, while LPG dealers do not provide any such service, Federation of All India Petroleum Traders (FAIPT) general secretary Ajay Bansal said.

Also, LPG rates haven't increased in over a year but petrol and diesel prices have seen frequent changes.

"Increase in prices mean our working capital (money used to buy fuel from oil companies) goes up. Also, our losses increase because of evaporation of fuel," he said questioning the Oil Ministry's rationale of hiking LPG dealers commission by almost 50 per cent and offering only 10 per cent to petrol pumps.

Officials said the hike in LPG rates comes within days of oil firms raising price of non-subsidised cooking gas (LPG) by Rs 127 per cylinder to Rs 883.5 on account of increase in international oil prices.

The government has granted exemption from customs and excise duty on non-subsidised LPG cylinders only for domestic consumption to reduce the price burden on the common man.