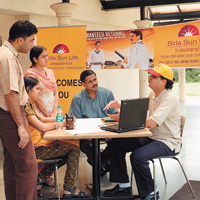 The committee on investor awareness, which was appointed in April, has apparently made up its mind, but as an afterthought, it decided to sound the public on its conclusions before sending in its report. So it has circulated a summary. It is surprisingly clear. Its pitch is to the common investor. He is told that the "army" of three million commission agents is serving him poorly. But the committee does not want to be seen advocating another bureaucracy to control them. So instead of a regulator, it proposes a self-regulator for the industry. But self-regulation is toothless, and can turn into mutual backscratching. Just look at the brotherhood of chartered accountants. They are central to corporate wrongdoings, but the first time they were heard to punish anyone was when B. Ramalinga Raju ran away with billions unnoticed by his auditors. Not that government regulation is any better. And one only has to consider the numbers involved; no regulator can effectively supervise three million even if their number does not increase. The only lesson to be drawn is that regulation — official or non-official, friendly or unfriendly — cannot cope with financial counselling; one must look for some other way to discipline the profession. But first one must ask why it needs to be disciplined. The committee's answer is that it "mis-sells" — that is, it sells investors products that they do not need. Its proof is the large number of insurance policies that lapse — that is, on which their buyers stop paying premiums. It says that the proportion of insurance policies that lapsed was over 10 per cent for 13 and over 20 per cent for eight of the 16 insurance companies. And on this evidence, it wants to set up an entire superstructure of agents' SRO and a grandiose Financial Well-being Board of India.

The committee never asked the buyers why they stopped paying premiums; it simply assumed that they had been cheated by agents. Actually, many of them were forced to take out insurance policies by their lenders; especially for mortgage loans, it is normal for lenders to insist that borrowers take out a large enough policy to ensure that the loan is repaid even if they die. And naturally, the borrowers renege on the policies as soon as they can. Besides, the solution the committee suggests, namely education and registration of agents, will not work. If cheating pays, agents will cheat. The solution lies in making it unprofitable to cheat.

The committee has already gone some way towards this. It argues for the prohibition of front-loading, and implicitly for the divorce of the agent's remuneration from the value of the product. Mis-selling arises either because one product pays a better commission than another, or because one company rewards its agents better than others. The solution then is to divorce agents from companies and products. But it will not work; if they are not allowed to use agents, companies will open shops and use employees for the same purpose. What we need is agents who advise on a variety of products and can yet compete with the companies' agents. And this will happen only if the companies themselves offer a broad enough variety of products.

To some extent, they do; public sector banks, in particular, run mutual funds as well. But then, they are the government's favourite daughters; private banks find it difficult to diversify in the same way. And as to non-bank financial companies — they cannot even dream of entering banking -- because of entry barriers erected by regulators. The Reserve Bank of India is the worst of them; it has not issued any bank licences for over a decade. ICICI Bank wanted to go into insurance; RBI stopped it. If the government is interested in serving investors better, it must force all its regulators to bring down entry barriers. Better still, it should combine them all into one financial regulator.

That brings us to the committee's most ambitious proposal, namely financial literacy. It wants agents to undergo training, pass an examination and get a certificate; at the same time, it wants to start thousands of mini-courses for investors. It is a beautiful vision; the only thing is that it is uncalled for. There are a variety of financial products; some are easy to understand, others almost impossible. No one needs a course in finance to open a savings account. If, on the other hand, someone is going to buy products structured out of options, he will have to have some mathematics to understand what he is going in for. But there is an easier solution than educating everyone. Complicated products should be the playground of those who have money to throw; minimum capital requirements are the answer.