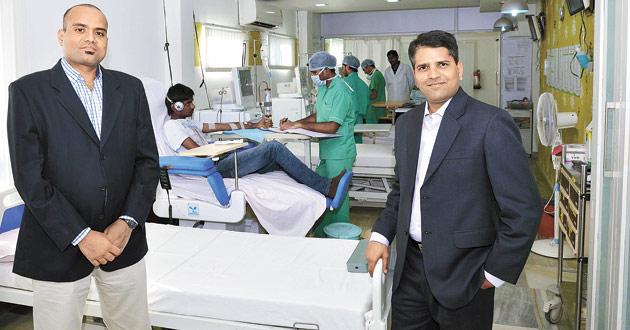 08 November, 2014
Print this article Font size -16+
Kamal D. Shah, a chemical engineer and a former employee of Apple, was living a life of bliss until bad news came calling. To be precise, it was not a single piece of news but a series of events that unfolded, starting 1997. It began with his kidneys, with both showing signs of damage. He was put on hemodialysis for a year and a half. His mother gave him a kidney, but the transplant wasn’t successful. A few years later, Shah was caught in the dreaded December 2004 tsunami while holidaying in Mahabalipuram with friends. Though he escaped, the incident took a toll on his body, causing severe kidney infection and resultant complications. Since then, Shah has been on daily dialysis at home.

But unlike most patients with a similar condition, Shah did not retire from an active life and went on to set up a dialysis care chain — Hyderabad-based NephroPlus — with Vikram Vuppala, a healthcare strategy consultant with McKinsey in the US. Later, Sandeep Gudibanda, an engineer-turned-entrepreneur, joined them.

Even as data indicates an acute shortage of medical infrastructure for dialysis and renal care, a new business segment is shaping up in India’s healthcare sector. In the past three to four years, several chains have come up offering quality dialysis facilities and related services. There are currently three or four such organised chains, while more are waiting in the wings with various business models.

There is little doubt that the potential for an organised renal care market is immense. There are millions of people in the country whose lives depend on dialysis. In fact, so serious is the current state of affairs that the Supreme Court, on 26 November 2014, sought a response from the central and state governments on the status of dialysis and renal care infrastructure in the country. The court’s action came in response to a public interest litigation (PIL) filed by advocate Sanjeeb Panigrahi.

A Crying Need
“The size of the dialysis market in India is about $350 million and is growing at 20-25 per cent annually. Unfortunately, about 3.5 lakh people in India reach the end stage of kidney disease every year,” says Shriram Vijayakumar, founder and chief executive of Bangalore-based DaVita NephroLife, which has already set up 14 centres.
For a 1.2 billion population, India has under a thousand nephrologists. “Various estimates put the number of people with chronic kidney-related diseases at around 20 million and, of this number, around 6-8 million are on dialysis. The problem is that just 15-20 per cent of them survive as most patients discontinue dialysis and medication mainly on account of the poor quality of the dialysis and high costs,” says Shrirang Bichu, associate professor and consultant nephrologist at Bombay Hospital and a promoter of Mumbai-based Apex Kidney Care.

Mukesh Shete, a leading nephrologist and co-promoter of Apex Kidney Care, says there is an immediate need to start more dialysis units as a patient of acute kidney failure has to undergo a minimum of 12 hours of dialysis a week in three sessions, until he gets a donor.

“In Mumbai, there are only 50 machines with public hospitals and another 1,200 machines with private hospitals and charity organisations. This year, 150 more will go to the public sector, but that is way short of the requirement, which is about 15,000 machines,” says Jatin Kothari, consultant nephrologist and transplant physician at Hinduja Hospital.

Viswanath Billa, consultant nephrologist and transplant physician at Bombay Hospital, says the quality of dialysis care in the country is pathetic and way below global standards. Lack of quality equipment maintenance and trained paramedical and support staff are other reasons why patients develop infections during dialysis.

Despite hundreds of cases of kidney failure in India, only around 5,000 transplants are conducted in the country annually. This is mainly due to the lack of matching organs of patients’ relatives and a complex regulatory process that stretches over 12-15 months.

Changing Business Model
While India is not lacking in potential for healthcare players in the kidney care segment, multinational healthcare chains are still reluctant to tap the market. The reason: it is not really a profitable business for corporate hospitals as dialysis costs in India remain low, says Billa.

Patients on dialysis need constant monitoring. Besides, the process of delivering high-quality dialysis requires constant attention to everything from water quality, machinery, training, documentation, infection control and clinical outcomes. Dialysis alone has over a hundred processes and protocols that need continuous monitoring, making renal care supremely complex and expensive and, thereby, rendering the Indian market unrewarding.
break-page-break
“It is neither cost-effective to provide dialysis within a hospital nor is it a core competency of hospitals since their bandwidth can be utilised more effectively on high-end services and in-patient care,” notes Vijayakumar.

NephroPlus has 18 dialysis centres across the country, of which 14 are housed in major hospitals. DaVita NephroLife has 14 renal care centres across Bangalore, New Delhi, Pune, Hyderabad, Chennai, Puducherry and Hosur in various delivery formats.

“We typically operate either independently within these locations on a variable share or fixed rental model or work on a joint-venture model with hospital partners or nephrologists where we share the investments and returns in an equitable manner,” says Vijayakumar.

Of the 250 dialysis units installed so far by Apex Kidney Care, 150 machines are at various hospitals where it manages the dialysis units, 80 are with standalone dialysis centres set up by charity organisations and 20 are rented out for home dialysis.
“Our strategy is to equip the centre with 10-12 dialysis machines and support tertiary hospitals with equipment on a revenue-sharing model,” says Vuppala, chief executive of NephroPlus. The investment required for a centre housed in a hospital is about Rs 80 lakh and that for a standalone centre with eight beds is Rs 1.2 crore. A centre usually breaks even in 10-15 months, says Vuppala.

A quality dialysis machine costs between Rs 6 lakh and Rs 6.5 lakh and around 5,000 rounds of dialysis can be done during its lifespan, usually in the range of five to seven years. “At three dialyses a day and 900 a year, the costs are recoverable in three to four years even if services are offered at Rs 1,200 to Rs 1,300 per dialysis,” says Kothari.

Renewed Interest
The business model followed by NephroPlus has got many interested in kidney care. Soon after it set up its first unit in 2010, Bessmer Venture Partners invested $4.5 million to help fund its expansion.

According to Vuppala, the chain will make profits in the next six to nine months. “We charge only in the range of Rs 1,300-Rs 1,800 per dialysis and are 30-40 per cent cheaper than corporate hospitals,” he says.

The promoters of Apex say their aim is to offer quality kidney care and insist that it is not a for-profit business. The first few units of Apex were funded with the help of donations from two businessmen. “So far, we have invested Rs 35 crore and are making profits now. Apex had revenues of Rs 30 crore last year. It also undertakes training for physicians, nephrologists and paramedics, besides linking willing kidney donors with patients,” says Billa.
With some success, these chains are now looking at expansion. NephroPlus is planning to set up 80-100 centres across the country and abroad in the next two to three years. “We are planning to raise some $10-15 million for the expansion,” says Vuppala. Apex is also planning to escalate to 50-55 centres by 2016, says Kothari, adding that funding will not be an issue.

The vendors of dialysis machines and support equipment are also tapping into the opportunity.

Nipro, a $3-billion Japanese medical equipment company, started an artificial kidney (dialyser) and dialysis equipment manufacturing factory in Pune in December 2012. It is the first such plant in India and the first for Nipro outside Japan. The company plans to make six million dialysers every year and export them to Europe, after tapping the Indian market. “Patients spend about Rs 1,500-Rs 3,000 per dialysis using imported dialysers. We will be able to reduce it to Rs 600-Rs 1,000 a month,” says Milind Pappu, managing director, Nipro India.

Fresenius Medical Care India, the market leader in dialysis medical equipment with a turnover of Rs 200 crore-plus, has announced 30 dialysis clinics across India by 2015. Other leading global companies in dialysis care such as Medtronic, Gambro of Sweden and Asahi of Japan are also active in the Indian market.

Despite all this activity, India has a long way to go in kidney care services, say nephrologists and players in the emerging industry. But, well begun is half done. India finally has an organised kidney care ecosystem.