Washington [US], December 9 (ANI): While the whole world has turned upside down due to the COVID-19 induced pandemic, American star Khloe Kardashian, on Wednesday (local time) shares the way to help bring a smile to people in need with her daughter.
The 36-year-old star took to Instagram to share video clips with her fans in which she is seen donating toys to the local fire station for children in need.
According to Khloe, she came across a news report that mentioned the decline in toy donations to more than 50% this year. She wrote, "This year so many people, understandably so, aren't able to give back in the ways they used to. But there are so many other ways we can give back." 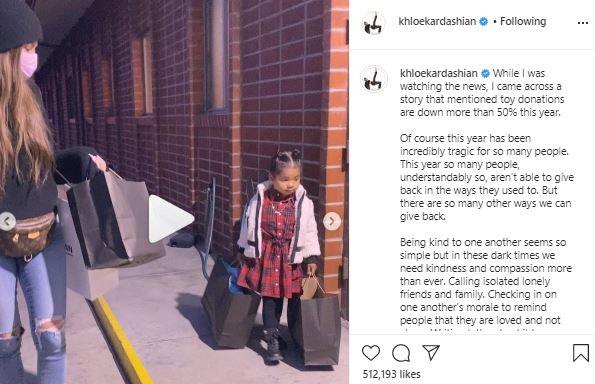 Khloe further added that there are many other ways to share the love with the world such as calling isolated lonely friends and family, writing letters to people in the hospital, and small acts of kindness to make someone's day special.
Referring to her daughter, she writes, "I think it is important for her to understand how blessed and fortunate she is. It's so important for her to see how we give back to others, ESPECIALLY in such unprecedented times. Children learn with action and consistency. This is just the first of many trips we are making." 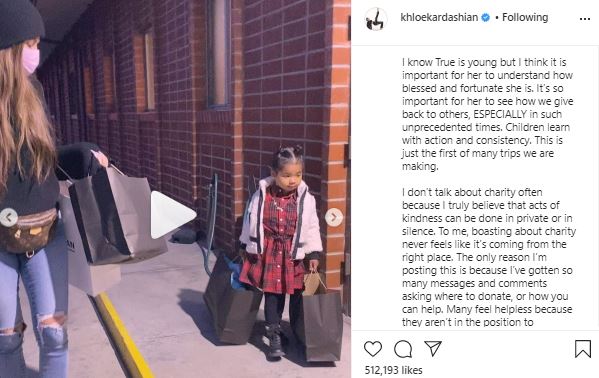 Continuing with her caption, the 'Keeping Up With the Kardashians' star explained that she shared the video of her doing charity to let people know how and where they can donate.
"The only reason I'm posting this is that I've gotten so many messages and comments asking where to donate, or how you can help. Many feel helpless because they aren't in the position to contribute financially," Khloe wrote.
Wishing fans 'Happy Holidays' from her and daughter True, the star concluded the caption. 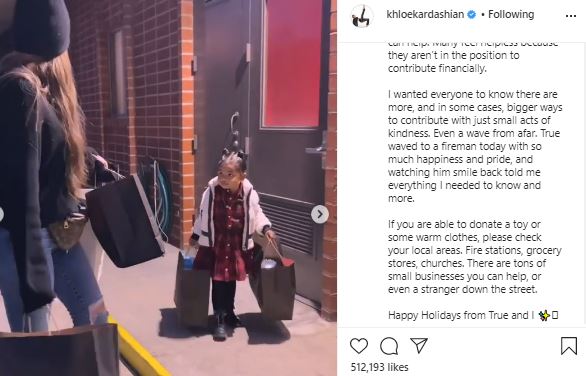