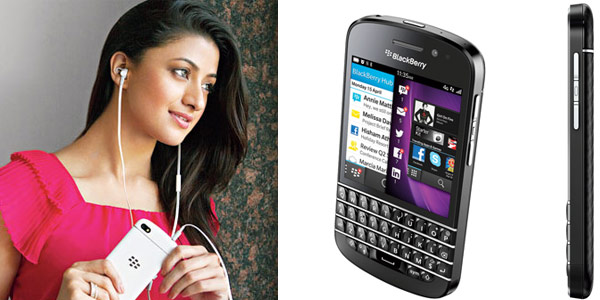 08 November, 2014
Print this article Font size -16+
Funny how quickly times change. Remember how, not too long ago, the keyboard was a standard feature on smartphones? Today the Q10, BlackBerry's first QWERTY phone since the launch of the all-touch-and-gesture-based BB10 OS, stands alone in its price class. The Q10 is somewhat of a hybrid dish, plating up a fusion of the modern BB10 spices with a 'key' ingredient from the brand's roots. The question is… as much as business users and BlackBerry loyalists have held out for a device like this… does it live up to its princely price tag?

With a 1.5GHz dual-core processor, a 3.1-inch touch screen display and 8-megapixel rear camera, the Q10 isn't really competing against the leading Android or iOS flagships on pure specs, although it is asking for similar outlays of cash. Don't get me wrong - the Q10 is by no means sluggish, and for the money, you do get an extremely refined build and a device that feels really premium. There's no question about it though - the Q10 looks rather traditional in a world of glass slabs, yet by itself feels modern and professional. And, in a world of anorexic devices, the smooth, mildly-stocky-in-comparison frame is comfortable to hold and use.

The iconic selling point — the keyboard — feels well spaced out and the metal frets that separate rows of keys reduce accidental presses. Even though it takes us less space than on previous BlackBerry handsets (in absolute terms), it is very easy to type on. Goes without saying — if you struggle with a touch screen keyboard, you can swear by the Q10's. BlackBerry loyalists will note that the keys on the Q10 are arranged in a straight line and not in a curved keyboard layout as found previously in the Bold series.

But BB10 had all those touch-heavy gestures, didn't it? With the Q10, results are mixed. The keyboard eats up space that could otherwise have been devoted to a bigger screen as with the Z10, where the gesture-based interface really came into its own. In effect, the peek and multitasking gestures do work, but you're left aching for more screen real estate. Due to the screen's smaller screen size, I still had to zoom in to read regular web pages, but the phone responds well in its handling of large image-heavy pages. The flip side is that keyboard shortcuts offer a quick way to navigate inside apps, and Instant Action — a universal search which lets you type in keywords (think "text Dad" to launch an SMS to your father) to make actionable commands - lets you get things done in a real jiffy. Fortunately, BlackBerry has done away with the extra hardware keys for navigating the phone, and accepting and rejecting calls, which has afforded the Q10 a bit of extra screen space.

The 3.1-inch screen, on the other hand, is a nice little 720 x 720 pixel Super AMOLED number, but the square format means that widescreen videos end up getting squashed to fit. That aside, it looks fantastic, and the high pixel density of 331pp means it is plenty sharp and readable. As with any high-end device, the touch screen doesn't miss a beat.

Rounding out the rest of the feature set is an average camera and strong battery life. The camera is really something BlackBerry can work on and improve — business user or casual user, camera usage has gone through the roof, and if this is your only phone, you're going to be left wanting in the camera department when you see how mediocre those party photos end up looking like. Battery life is pretty good, with its 2,100mAH battery lasting the over a day with moderate use (email accounts synching, twitter etc) but you're still going to want to juice it up before you begin Day 2. A minor gripe — should your phone switch off at any point of time, turning it back on is a particularly laborious process, with boot times easily going past the one minute mark!

Should you buy one, though? It's expensive for the feature set, and BB10 is better served by the Z10 thanks to the larger touch screen. Like Windows Phone, BlackBerry 10 still has some ways to go before it can match up to Android and iOS in terms of sheer app availability. You'd remember that I maintain that BB10 handles multi-tasking better than any other platform, but you sorely miss the large variety of apps with which to multitask! Oh, and not every BlackBerry 10 app is optimised or compatible with the smaller display, resulting in some early degree of fragmentation for the platform already.

Net net, if it's a keyboard you crave above all else, you could consider the Q10 or the upcoming Q5, which should offer a much lower price point.