Kerala Not To Make Aadhaar Mandatory For Govt Benefits: Minister 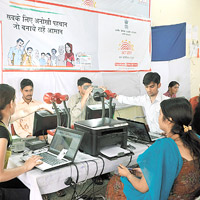 08 November, 2014
Print this article Font size -16+
The Kerala government has no plans to make Aadhaar mandatory for availing benefits under various schemes, State Industries and IT Minister P K Kunhalikutty said in Thiruvananthapuram on Wednesday (21 January, 2014).

However, Kuhnalikutty said the decision to link Aadhaar with government benefits has to be taken at political and policy level and only after taking people into confidence, such decisions would be implemented.

"We have to convince the people that it is good," he said while addressing a press conference in connection with the 17th National Conference on e-governance to be held in Kochi from January 30.

In Kerala, nearly 97 per cent of the population has been enrolled under Aadhaar and 2.75 crore people have been given UID number. But the issue of linking Aadhaar with various benefits is a question of policy and political one, he said.

All the 14 districts have been covered under the national programme of Direct Benefit Transfer Scheme.

On initiatives of e-governance, he said e-office project has been started in a section of the Finance Department in government secretariat. "The objective is to make Kerala the first e-office secretariat in the country," he said, adding, Kerala is now billed as the most e-ready state in the country.