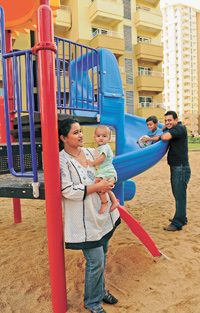 But Anuradha and Rahul's is no unique story. Students opting for an executive PGP often find themselves in a similar situation and this is where the B-schools' facilities for married students play an important role. "Because the programme is targeted at executives with some work experience and because the minimum age to enter the programme is 27 years, 80-85 per cent of the batch are generally married," says Alok Jain, founder in-charge of the programme at IIM-A. "Considering the rigours of the course, few opt to come with their families, but we offer the best environment for such students. It keeps them focused on their studies."

Apart from accommodation, the institute also offers other facilities such as security, on-call doctors, parks for children, hobby classes, health club and a crèche where working spouses can keep their children. "We ask the students to provide us with their spouses' profiles, and we circulate these profiles to faculty members who involve these spouses in their projects," says Jain. Of course, all this comes at a cost included in a candidate's overall fees.

While students staying with their spouses on campus is not so uncommon a phenomenon in overseas B-schools, the trend is yet to catch up in most B-schools in India, especially the       two-year MBA institutes. Nevertheless, business schools such as ISB, offering the flagship one-year PGP, have been in the game for some time now. Out of ISB's 172 married studios, 168 are occupied currently. Not only does the institute boast world-class infrastructure, but it also offers temporary employment for spouses of married students for a year. Moreover, it has a shuttle facility and a baby day care centre.

break-page-break
Before they graduated from ISB, Karan and his childhood sweetheart Natasha were living in the institute's married housing studios. "Even when we were living together, there were two separate rooms for our privacy in case we were working on separate projects or assignments," adds Natasha who, prior to joining Tata Quality Management Services as a consultant, also studied at ISB with Karan. "We could also do some socialising as we had about eight couples living in our block."

Karan and Natasha chose ISB for an MBA after completing their Bachelors in Electronic Engineering and working in Chicago for two years. The B-school gave them an international exposure, says Karan who has joined his family business of automotive manufacturing in Kolkata. "The facilities here are world class. For the two of us, it has been a wonderful year with an Indian flavour," he adds.

Many other business schools are joining the married housing bandwagon to attract the best students, who may not have joined because of family compulsions. A good example is the Chennai-based Great Lakes Institute of Management (GLIM). The institute has come up with 52 furnished on-campus married housing studios. Binoy and Midhu Cherian were among the first five couples to spend the last year on the Great Lakes campus.

For the Cherians, things fell into place from the very outset. When Binoy, after four years of work experience in iFlex, a subsidiary of Oracle, turned to GLIM for an executive MBA, Midhu also took up a job with the Chennai division of Tata Consultancy Services, where she worked as an IT analyst. Midhu, along with another spouse, would carpool for going to work. "The spouses were treated more like students and were given full access to all the facilities, be it the library, the Internet or the mess," says Midhu. "Three families had kids. So, the people who enjoyed the most were the kids, with many people around to play with." Besides, the institute had a couple of schools in the vicinity for the children, she adds.
"The only issue for spouses could be the location because we are located about 60 km from the city," says S. Sriram, director of GLIM. "If one wants to look for enjoyment outside the campus, they have to travel. But we have a shuttle facility that runs between the city and the campus every day."

The trend is also catching up in B-schools that offer two-year programmes.

For example, Prakash Pynadath, a first-year PGP student at XLRI, is currently staying with his wife Soumya Antony on the institute's campus. "Before moving to XLRI, my wife had quit her job, so we asked the administration to get her placed somewhere on the campus," says Prakash, who had been living in Europe for the past six years before deciding to come back to his country. Soumya now manages the international relations for the institute. Naturally, Prakash is all praise for the Jamshedpur-based school. "XLRI has been very accommodative in its approach. All of the spouses have found some work on the campus itself, which doesn't take up too much of their time but keeps them busy and gives some remuneration for their work," he explains, adding that these spouses get some research assistantship or teaching assistantship based on their eligibility.

While the one-year PGP programme has many couples staying with their kids, Prakash and Soumya happen to be one of the first married couples from a two-year programme batch to stay on the campus.

Though not a ubiquitous feature of Indian B-schools, family accommodation facilities are nevertheless making MBA a viable option for those who, because of family commitments, were unable to sign up for the coveted degree. Limited to a few premier B-schools in India, the facilities have simplified B-school-related logistics and mobility issues for prospective students who are married but plan to work towards a management degree.