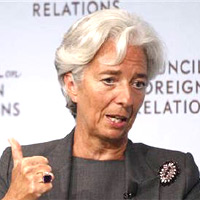 08 November, 2014
Print this article Font size -16+
International Monetary Fund chief Christine Lagarde on 24 January asked countries to keep up the momentum in the global economy, cautioning that it could relapse into another crisis otherwise. "... keep it up, keep the momentum, don't relax, we should not relapse," she said.

When asked if there were signs that co-operation is going to break down between countries, Lagarde said: "What I observe is that in terms of currency it has always been more efficient to work co-operatively."

Recalling the incident of Japan being severely hit by earthquake and tsunami in 2011, Lagarde, who was then French Finance Minister, said she called up finance ministers of other countries to support Japan.

"... I immediately called all my colleague finance ministers and the central bank did the same thing in order to co-operate and support Japan, so that the yen would not appreciate as it was beginning to...," she told television channel in an interview. "... that (effort) was efficient, so co-operation is always efficient," the Managing Director of the multilateral agency said.

Regarding loose money policies followed in many countries, Lagarde said that such a step was necessary in some of them.

"We are clearly thinking about the US, we probably thinking about Europe to certain degree, inflation is still at around two per cent, so, as long as that remains under control the (massive) public liquidity is not a huge concern, it will be wiped out," she noted.