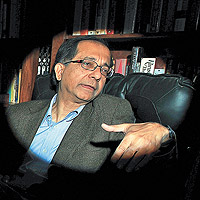 He said there was a need for flexibility in labour market even as the regulatory framework exists.

"We need regulatory framework but we need greater flexibility in the labour market. But we don't want completely free labour market," he said.

Labour reforms have been pending in India for long. Amendments to various labour laws have been awaiting Parliamentary approval. India has plethora of labour laws dealing with trade unions, provident funds, industrial disputes and industrial establishments.

India's economic growth rate has fallen to a nine-year low of 6.5 per cent in 2011-12. In the first (April-June) quarter of the current fiscal, the growth slowed to 5.5 per cent.

Basu was earlier the Chief Economic Advisor in the Ministry of Finance, before being chosen as the chief economist by the World Bank.

"With new technology and new innovation, jobs move around the world. This is to remind industrial countries to not indulge in protectionism," he said.