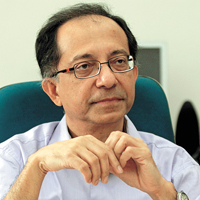 In an interview with Reuters, Kaushik Basu said G20 finance ministers, meeting in Moscow on 15 and 16  February, should act on a solution before escalating tensions spark another global economic crisis.

While the risk of a sudden plummeting of the global economy had diminished because of measures adopted in Europe to ease its sovereign debt crisis, a rapid bounce-back in growth was unlikely, he said.

"We are not in a currency war but could be inching towards one," said Basu, a former chief economic adviser to the Indian finance ministry. "Global leaders need to coordinate policy to prevent either (one) from happening or markets believing it is happening. Such coordination is entirely within the realm of the possible; all it needs is determination."

He said that, while unconventional monetary policy measures by central banks in the United States, Japan and Europe to revive growth had proved valuable, the impact of those policies was "beginning to feed into the global situation".

"The need is for some global monetary and fiscal policy coordination and the G20 is the forum that could push on that, and I think it ought to take that task seriously," he added.

Advanced economies have ramped up debt and printed money, which has weakened some of their currencies and made them more competitive. Meanwhile, near-zero rates in the rich world have exacerbated the problem of hot money flows for emerging markets with high interest rates and driven up their exchange rates.

A New Normal?
Most recently, tensions have increased over aggressive expansion of monetary policy by Japan's new government, which it says is aimed at beating deflation. But U.S. and European officials have grown concerned about comments from Japanese officials that suggest Tokyo is targeting a specific level of the yen, which has lost about 20 percent against the dollar since October.

"You need a minimum amount of collective agreement on these policies so that if the Fed acts, or the Bank of Japan acts, central banks in other major economies, such as China, India and Indonesia, are able to take a more or less supportive position," Basu said, adding: "For that you need a collective conversation."

The global crisis has reduced high rates of growth in emerging market economies like China, but the slowdown did not signal a "new normal," Basu said.

"I do believe there is a shifting of global gear that is going on - and you won't see it just now - but if you do prospecting for three to four years, a couple of emerging economies will come out as the growth drivers of the world," he said.

Basu said trade among emerging economies was increasing, while savings and investment rates were rising in middle-income countries, which would support stronger economic growth.

"Eventually, I expect industrialized countries to go back to slightly higher growth, which for them is fine because they are already developed, and I expect some emerging economies to get back to between 8 and 9 percent growth, which they had before the global financial crisis," Basu added. (Editing by Edmund Klamann)