Mumbai (Maharashtra) [India], February 1 (ANI): By sharing a glimpse of his charming smile, Bollywood star Kartik Aaryan on Monday treated fans to a stunning picture, asking if he can do a hair and toothpaste advertisement.
The 'Love Aaj Kal' star took to Instagram and showcased his chiselled triceps. In the monochromatic photograph, Kartik is seen sporting a black t-shirt, while sporting long hair and flashing his million-dollar smile. The actor looks handsome while posing candidly for the lens. 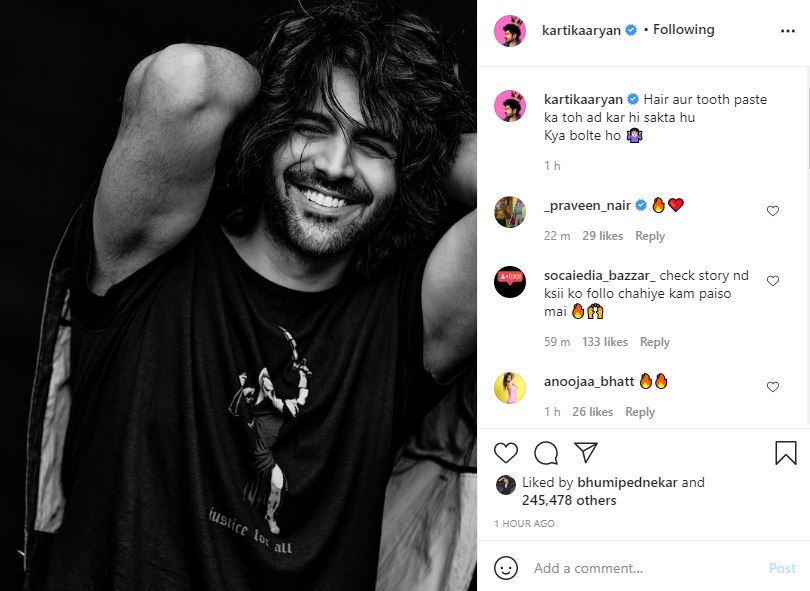 Asking his fans if he can do a hair and toothpaste advertisement, the actor wrote in the caption, "Hair aur tooth paste ka toh ad kar hi sakta hu...Kya bolte ho."
Celebrity followers including Bhumi Pednekar and more than 2 lakh fans liked the picture within an hour of it being posted. Scores of fans also chimed into the comments section, praising the picture and approving him as a perfect model for toothpaste and hair advertisement.
Meanwhile, on the work front, the 30-year-old actor, who had made his Bollywood debut with 'Pyaar Ka Punchnama', was last seen in Imtiaz Ali's 'Love Aaj Kal', co-starring Sara Ali Khan. The film was a sequel to Imtiaz's 2009 movie by the same name, which starred Deepika Padukone and Saif Ali Khan.
The actor has an impressive line-up of projects in the pipeline including 'Dhamaka', 'Bhool Bhulaiyaa 2', and 'Dostana 2'. (ANI)