New Delhi [India], December 25 (ANI): Bollywood star Kartik Aaryan on Friday wished fans a Merry Christmas in 'Dhamaka' style.
The 30-year old actor who has been shooting for his upcoming thriller flick 'Dhamaka' sent Christmas wishes to his fans on social media. However, the wish was a little different as Aaryan signed himself as Arjun Pathak, the character he will be portraying in his film.
In the picture shared by the 'Love Aaj Kal' star, he is seen sporting the look of Arjun Pathak, donning the official blue blazer with matching tie and white shirt with blood strains. To give a humorous touch to the picture, Aaryan wore a Santa Claus dancing ear red headband as he flashed his radiant smile for the camera. 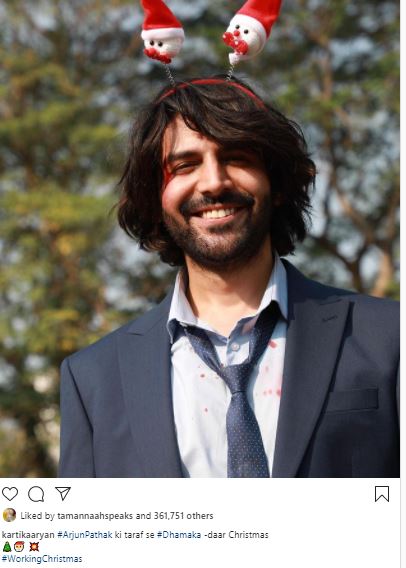 With the post which garnered more than three lakh likes on Instagram within a few minutes of being posted, the star wrote, "#ArjunPathak ki taraf se #Dhamaka -daar Christmas #WorkingChristmas," using a Christmas tree, Santa Claus and collision emoticon.
A day earlier, Aaryan gave a sneak peek from the film's shooting set to his fans on social media. Helmed by Ram Madhvani, 'Dhamaka' is being produced by Ronnie Screwvala, Amita Madhvani, and Ram Madhvani. (ANI)