New Delhi [India], January 29 (ANI): Bollywood actor Kajol Devgan treated fans and followers on social media with alluring pictures from her recent photoshoot on Thursday.
The 'DDLJ' star hopped on to Instagram and shared a series of captivating pictures in which captures her gracefully acing the elegant patterned jumpsuit which she teamed up with black coloured high heels.
With a no-makeup look and open sleek hairstyle, Kajol raised the glamour quotient with big golden coloured hoop earrings.
The posts received more than two lakh likes within a few hours of them being posted. She added a little caption too, which read, " A little photoshoot never hurt anyone," using a shy monkey emoticon covering his eyes. 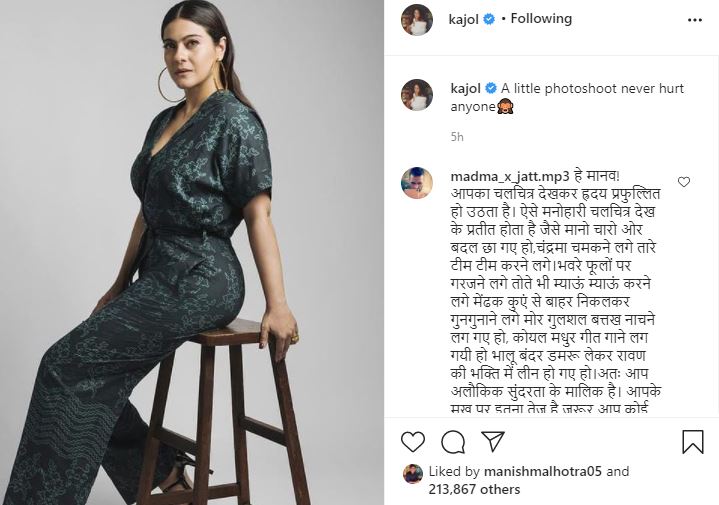 The actor has of late started sharing about her daily activities with fans.
Meanwhile, on a work front, Kajol has been hogging the limelight for her role in the latest Netflix family drama 'Tribhanga' which also stars Tanvi Azmi and Mithila Palkar.
The film revolves around the story of the dysfunctional family dynamics of the three central characters belonging to three different generations. While Azmi portrays the role of a critically acclaimed writer, Kajol essays the role of her daughter who is an established Bollywood actor and an Odissi dancer in the film.
The flick that marked Kajol's debut on the web platform is helmed by Renuka Shahane and is produced by Kajol's husband Ajay Devgn, and Siddharth P Malhotra. Sapna Malhotra, Deepak Dhar, Rishi Negi, and Parag Desai are also the co-producers. (ANI)