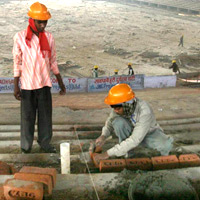 08 November, 2014
Print this article Font size -16+
India's industrial output likely remained subdued in July, after falling steeply the previous month, as uncertainty in the global economy hurt exports, and the key infrastructure sector grew at its slowest pace in six months, a Reuters poll showed.
The index of industrial production edged up 0.3 per cent year on year in July, according to a median forecast of 30 economists, after shrinking 1.8 per cent in June, which was the third contraction in four months.
The forecasts for July ranged from a contraction of 2.5 per cent to a rise of 4.0 per cent.
Industrial output accounts for a little over 15 per cent of India's Gross Domestic Product and the consensus points to continuing weakness for the economy which languished near a three-year low of 5.5 per cent annually in the three months to June, having slowed to almost a decade low in the previous quarter.
"The global export climate still looks uncertain because the euro zone is still in recession and the recovery in the U.S. is not completely certain," said Amy Zhuang, senior analyst at Nordea Markets, who is expecting output to fall 2.5 per cent.
Contraction in manufacturing spread further around the world in July and August as the euro zone's troubles inflicted more damage on the global economy, business surveys showed.
Data already out showed India's exports tanked almost 15 per cent in July and have fallen four times in the last five months, with officials attributing weak demand from the United States and Europe for the fall.
Also, the country's eight key infrastructure industries, which account for almost 40 per cent of factory output, expanded just 1.8 per cent in July, the slowest pace since January this year.
High interest rates, lack of government reforms, rising raw material prices and weak investments have also hit domestic demand.
Capital goods output, a key investment indicator, has grown only once in the past 10 months.
"The government hasn't really committed strongly to making any reforms so that does not help foreign investors' confidence in the Indian economy," said Zhuang.
The government, which is caught in corruption-scandals, is unable to push through long-pending policy reforms such as foreign direct investment in the supermarket and airline sectors and cutting subsidies on fuel prices.
Reserve Bank of India (RBI) governor Duvvuri Subbarao is not expected to act on calls for an interest rate cut to support growth as high inflation is still the main concern.
Instead he has shifted the onus on the government to pull the economy out of the slowdown and remove supply-side bottlenecks to ease inflation.
"Inflation remains too high and Subbarao has made pretty clear that he is unlikely to cut rates now," said Andrew Kenningham, a senior economist at Capital Economics.