Jugaad: An Asset Or A Liability? 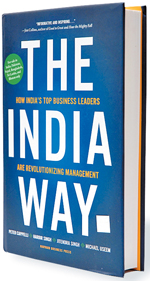 08 November, 2014
Print this article Font size -16+
Depending on where you come from, Jugaad, the classic Indian method of working around the bumps and potholes in the business ecosystem, can be both an asset and a liability. If you go by The India Way, authored by a team of teaching veterans from The Wharton School, University of Pennsylvania, you belong to the tribe that hails jugaad as India's brownie point in business management.

But if you agree with what a senior executive told a gathering in Mumbai recently, our over-emphasis on jugaad results in an attitude of chalta hai (a compromise) — the same executive is prominently quoted in the book, not on jugaad, though. The concern is that Indian companies try to work their way around problems, when they could take the longer path of going to the root of the matter and solving the issue for good. Should that be the India way, or could it potentially lead India wayward?

The authors are confident that the India way of management could have the same impact on the world as Japanese businesses had on manufacturing — despite the fact that India ranks at a lowly 15th among 134 nations ranked on the basis of competitiveness.

The book begins with a potential of bringing unique Indian management techniques to the world. But it ends up looking like another cheerleading attempt as India takes on the world. As a result, the book, put together painstakingly by interviewing over 100 top executives from leading Indian corporations, ends up as a compilation of anecdotal evidence and quotes. There is ample evidence to suggest the authors have a clear view from the top, but not enough to show they have invested significant time in putting their ears to the ground. If you are sitting right here in India, getting a ringside view of the action and even participating in the process of the India way, you are unlikely to get excited by the book.

The authors cite the difference between Indian and western ways of management. There are infinite comparisons made with American corporations, right from how companies in both countries train employees to how business leaders in both countries give back to society and engage in nation building. The American way is not seen to be as effective in development of workforce and training them, but one could debate on who contributes more towards social uplift, even on Indian soil — Microsoft's founder Bill Gates or India's IT billionaires?

But some comparisons are lopsided. Wal-Mart, for example, is compared with Kishore Biyani's Pantaloon Retail. The authors' argument is that by investing in significant training of its employees, Pantaloon competes, "at least in part", on customer service, while Wal-Mart competes solely on price. But anybody who follows Indian retail knows who started off the low-price war in organised retail in India. And there is little to suggest that Pantaloon offers its customers superior service than the others.

Indian business leaders also make tall claims such as focusing the Indian business principles on the 3Ps of people, planet and prosperity. Predictably, no one talks about the uncomfortable working conditions in sweat shops, the increasing disparity between the country's rich and poor, and the callous attitude of several businesses towards managing natural resources. Dive deep inside the book, there are points to mull over. India-way companies, for example, are portrayed as those who look at internal resources to meet business challenges, while their American counterparts seek value in mergers and acquisitions. The good way to start searching for internal excellence, according to the book, is to develop a good answer to the business leaders' question: what are we better at than our competitors?

It also leaves an open-ended question, saying that while the India-way approach might be good enough for the time being, will firms have to dunk this stand and converge with the US style of management in the future, when more Indian companies increase their exposure to global investors? Another point of influence that could change the India-way of management is the age of the business leader. Nearly 76 per cent of business leaders interviewed were  50-80 years old and 96 per cent of all respondents were male. With younger business leaders entering the corner office and with more women entering the boardroom will the India- way of management change?