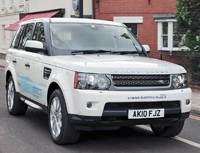 Another UK luxury car maker, Land Rover (now owned by Tatas), showed off a concept diesel-electric hybrid SUV called Range_e. Based on the Range Rover Sport, the concept uses a 3-litre diesel engine and a 69-kw electric motor. On electric power alone, the Range_e can travel more than 20 miles (32 km). And yes, like a true Land Rover, this one, too, is a 4-wheel-drive with all associated offroading paraphernalia. Range_e will serve as the test car for the first diesel-electric hybrid from the company's stable in 2013.

And finally, there's the Active E concept from BMW, which is also electric. The German car maker, which is running a programme to create a megacity vehicle (MCV) based on electric technology, has based this concept on the 1 series coupe. Sporting a lithium-ion battery developed specially for this model, the Active E runs 160 km on a single charge with a top speed of approximately 145 kmph. You might, of course, happen to come across a test model of the Active E on the roads sometime this year in the US, Europe or China as BMW is producing more than 1,000 test units of the Active E concept for use by fleet owners and select private car owners. Their feedback will be incorporated in the production programme of the MCV, which BMW will launch under a new sub-brand in 2013.